Rugby World Cup: Kleyn ready to do a job for adopted country

‘Three years of hard work has paid off. Hopefully I can do Ireland proud now,’ says second-row 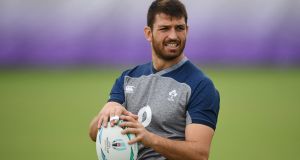 It’s fair to say that not only is Jean Kleyn the least capped player in Ireland’s World Cup squad, but as the latest of the project players who edged out the understandably popular Devin Toner, he is probably a less popular pick. He surely knows it too.

“I’d say there was always going to be a bit of backlash,” he admitted at the squad’s media day in Yokohama on Wednesday. “I don’t read it. And I try not to read into it too much. I’m here to do a job, and hopefully I can do that well.”

Perhaps also the most surprising inclusion – it even took him a little by surprise.

“It did happen faster than I thought it would. I was brought over before the Currie Cup. Back then it was mentioned, but I never thought I would even make it into the training group, never mind the actual 31-man squad.

With James Ryan and Iain Henderson looking like the first-choice second-row pairing, whether or not Kleyn has a role on the bench this Sunday remains to be seen. However, he is clearly going to have a big role in this tournament, and no one can deny his achievement in forcing his way into the squad.

“It’s a great honour to represent my adopted country. You sit and wait for the phone call, and when you get the acceptance email it’s brilliant. Three years of hard work has paid off. Hopefully I can do Ireland proud now.”

His pride also emanated in all those he represented personally. “Family, coaches, my girlfriend [Aisling Kelly], everyone I interact with on a daily basis and plays a part in your development as a person and a player. Everyone that ever had a finger in the pie.”

From virtually the moment Kleyn set foot in Munster he never hid his ambition to play for Ireland, even informing Rassie Erasmus that he would not be going back to South Africa.

“I sort of figured that if I was coming over I couldn’t have the thought that I’d go back some day. If I did that then I’d get a year into it and be homesick, whereas when I committed I committed fully.

“I basically came over with my entire life packed into three bags, and that was it for me. I knew that was going to be it for at least the near future, if not the indefinite future.”

He says he is now an “immensely different” player from the one who landed in Munster just over three years ago thanks to the Munster and latterly Irish coaches.

“I’d like to think I’m slightly better. I think I’m more of a rugby player now in the sense of not being afraid to catch and pass the ball. I like to actually play the game now instead of just running from ruck to ruck. It makes the game slightly more interesting.”

Kleyn expected his introduction to the test environment to be a step up but this has been more than he expected.

“Everyone always says it’s very detail-focused in the Ireland camp, but it’s really detail-focused you know?” he emphasis, widening his eyes as well as stressing the word.

“But I was expecting it would be different. You’ve got the 31 best players in Ireland and they’re all striving to be at their absolute best. There’s no room for error, and there’s not much allowance for it either. So you’ve got to be at your best the whole time, which is a good environment to be in.”

The issue of doping in the sport has cast its biggest shadow over South African rugby, and while initially maintaining “I wouldn’t have any particular views on that” he added: “I think doping is wrong, I make no qualms about it. I think it’s wrong, and it shouldn’t be done.”

“Saying that South Africa has a problem? There has been a few cases over the last few years, but there’s a few cases everywhere. It comes out everywhere, except not as much in Ireland really. So I suppose everybody except Ireland. That’s pretty much all I have to say about it.”

2 Regrets for Munster as Leinster find a way, again