Robbie Henshaw wants to be at centre of Irish action 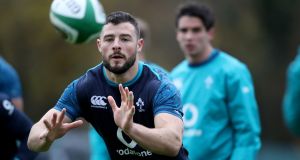 Robbie Henshaw during training at Carton House ahead of Ireland’s clash with Argentina. Photograph: Dan Sheridan/Inpho

As Joe Schmidt looks to broaden his options at fullback this month, with Jordan Larmour, Andrew Conway and Will Addison all potential candidates, it’s also worth noting that this was the position Robbie Henshaw first cut his teeth with Connacht.

That was all of six seasons ago, when Eric Elwood pitched Henshaw into the team primarily as a fullback, and declared he would be a future Irish international. Having been used as a replacement outside centre in his first three appearances, and made his debut there away to Glasgow, Henshaw’s full home debut was at fullback in a stunning 34-6 win over Leinster, with Rob Kearney his opposite number.

The position afforded him ample scope to use his running game as well as his under-rated passing game. But he is such a strong, all-round footballer, and good defender, that ultimately he has become primarily a centre, and not unlike Gordon D’Arcy, a more restrictive inside centre role at that.

Yet on the four occasions he played outside centre last season he seemed almost liberated, and scored two of his three tries there in the wins over Montpellier. During the Lions tour particularly, you wondered if being restrained to the role of a battering ram brought the best out in him.

Through it all, akin to Keith Earls, you also sometimes wonder if fullback mightn’t have been Henshaw’s best position.

Last Saturday week, when Kearney was replaced after suffering a shoulder injury early in the second half of Leinster’s win away to Benetton, Conor O’Brien came on in midfield and Henshaw shifted to fullback for the last 35 minutes. Again, he seemed liberated.

Recalling the last time he played there, for the last stages of his debut for Leinster in the win over Munster at the Aviva Stadium two seasons ago, Henshaw admitted: “It was nice, it was a bit different. Open land with plenty of space. I suppose it took me back to the early days of my career. It was enjoyable.”

For public consumption at any rate, Henshaw maintains he has no regrets about not remaining at fullback. “Not really, no. Things have gone well for me in the centre, I have enjoyed it in the centre.” Proving his versatility, he adds, “is probably another string to my bow”.

“I suppose if the opportunity came, I wouldn’t mind going back but I’ll stay focused on the centre for now.”

“More freedom, more freedom, more eyes I think. More pressure under the high ball. Yeah, definitely, if you get the ball in space, you have options to kick, run or pass. You have more time on the ball to make your decision.”

As to whether he’d be of a mind to tell Schmidt that he wanted to play fullback, Henshaw chuckles cheerily. “He’d probably laugh at me!”

Henshaw also made his Ireland debut at fullback, four days before his 20th birthday against the USA in Houston in June 2013, but has won his subsequent 35 caps in midfield. That said, he was covering fullback as well as centre on the bench against Fiji last November, but Chris Farrell’s injury prevented Schmidt from giving Henshaw a run at “15”.

“I think he knows that I have played plenty of rugby there,” added Henshaw. “It’s just where he can get the best out of me is where he will play me. That’s the centre and that’s where I enjoy playing at the moment. But I am sure he knows from what I have done previously that if needs be, I could cover.”

Schmidt remained in the Carton House with a dozen players, one of them being Henshaw until Wednesday of last week when, according to the Irish centre there were “a lot of conditioning games and small sided games which was tough because it was playing small teams on a big field. Plenty of running. It nearly took me back to the Gaelic days with the fitness”.

“It was good. Got some good work done on and off the pitch. We did a bit of preparation for the next few weeks as well. So we got a good look at what’s coming up.”

Argentina may be slipping under the radar outside the Irish camp a week before meeting the All Blacks, but not so inside it.

No doubt echoing the message out of the squad all week, the Pumas have, stressed Henshaw, “loads of threats across the park”, and he pinpointed the outside three. “[Bautista] Delguy on the outside, along with [Matias] Moroni and [Emiliano] Boffelli have really shown in the Rugby Championship.”

“I think [Nicolas] Sanchez at ‘10’ is a really tricky player and a really experienced player, and they play well when he plays well. So we need to shut him down early and be in control.”

In this, Henshaw will be a key defender at inside centre, and citing the Pumas’ high volume of line breaks and ability to conjure length of the pitch tries off turnover ball, he added: “We need to be really, really solid in our defence. Even the last time we played them, they nearly scored a try from under their own posts when they went through the phases and went up the pitch, and nearly scored with a kick through on the floor.

1 Owen Doyle: Creeping professionalism of schools rugby a threat to the game
2 GAA officials and referees brace themselves as new rules kick in, and this time it's for real
3 Caroline Wozniacki’s career ends with defeat to Ons Jabeur
4 Cox calls for a more relaxed transfer regime in the GAA
5 Scotland’s Finn Russell missed training after Sunday drinking session
Real news has value SUBSCRIBE