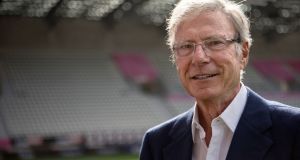 Wild, whose family made their money manufacturing Capri Sun, decided to spend a chunk of it trying to professionalise German rugby. “I got sucked in,” he says, “because I believe if you are going to do something, you do it right.”

It almost worked, too. The team Wild built are three games away from playing in the Rugby World Cup. Only the three will likely be the last games they ever play.

Germany are one of four teams competing in the World Cup repechage in Marseille this month. It is a round-robin tournament involving Hong Kong, Canada and Kenya. Whoever wins takes the last qualifying spot in Pool B in Japan next year, alongside New Zealand, South Africa, Italy and Namibia. The team of players, staff and administrators Wild has put together have been working towards this moment for the 10 years. Wild describes it as “the dream of their lives”.

The director of rugby, Kobus Potgieter, is one of them. In 2007 he was working as a consultant at the Blue Bulls rugby academy in Pretoria when he was headhunted by Wild, who wanted him to help set up a rugby academy in Heidelberg.

“It was a big question for me,” Potgieter says, “because I’d never heard of German rugby before.” It is, he admits, very much “a minority sport”, but there are still around 120 clubs in Germany and Potgieter estimates there are about 3,000 adult male players.

Germany was once a strong rugby country. The first clubs were set up in the 1870s, and in the 1920s and ’30s the national team regularly beat Italy, Romania and even France. But most of those players died in the second World War and, afterwards, the sport was crowded out by football. It became a university game, which is how Wild first heard of it. “My father was an Olympic rower and also a rugby player,” he says. “When you’re a student in Germany you row in summer and play rugby in winter, so my dad was very much in it.”

Wild never played himself but he’s a great believer in what he calls “the values” of the sport. “Those principles of integrity, respect, passion, discipline and teamwork should be appreciated and taught because I think they’re needed more than ever,” he says. Football, he says, has a “hooligan” problem. His mentions his friend Dietmar Hopp, who invested his millions building the football club TSG Hoffenheim. “After 20 years he is still being personally attacked because of it”. Hopp recently sued a group of fans for abusing him.

So Wild put his money into rugby. He set up the Wild Academy, built a training facility, with a 4G heated pitch, gym, and employed overseas players and coaches on his company payroll. “He paid for all of it,” Potgieter says. In the national team, “80 per cent of the players and staff are people who came straight from Wild’s programme.” A lot of them, like Potgieter, never even had contracts with the federation but were employed directly by Wild. “The whole reason German XVs rugby was moving forward is all thanks to him.”

Then everything fell apart. In the last year the project was ruined by two rows. The problems started when Wild took over Stade Français in June 2017. In May Heidelberger RK qualified for the Challenge Cup. They were the first German team to do it, until European Professional Club Rugby (EPCR) threw them out again because Wild now owned two clubs, which was a conflict of interest. He had to give one up, and he chose to let go of Heidelberg. “Two weeks before the draw we got told that we’re not allowed to play any more,” Potgieter says, “and all these guys lost their jobs.”

At the same time Wild was fighting with the German Federation. “The association itself was really amateurish,” Wild says, “and I’m not used to that.” Last November Wild’s players went on strike to force the federation around to his way of thinking. Without them Germany put out a scratch team who were battered in every game they played. So the federation gave in. It appointed a new president but it came too late. Wild pulled his funding but has promised to give them €2 million a year for the next five years if they can find three other sponsors who will match his commitment.

Which is where the repechage comes in. Germany squeezed through after Romania and Spain were punished for fielding ineligible players. All of a sudden the Germans were three games away from making a World Cup. Only, they had no money to prepare with. So Wild stepped in again. “I promised them I would pay for the repechage,” he says. “Otherwise they couldn’t even have participated, so I gave them €300,000. I wanted to give them the chance to achieve their dream.” They have used some of the money to hire Mike Ford as coach.

Come December Potgieter thinks he will be out of a job too, just like the rest of Wild’s players and staff. “You want to just focus on the games but it’s always on the back of your mind,” he says. “For a lot of us the question is, ‘what do I do in December?’ But we try to push it to the side.”

If they can make it through to the World Cup those three sponsors will be easier to find. “We’ve got one more chance,” Potgieter says. “We’ve a got a month left, three games to achieve something great for German rugby, for our team, and for ourselves. It’s all in our hands.”

3 Fabien Galthié cleared of any wrongdoing for leaving bubble