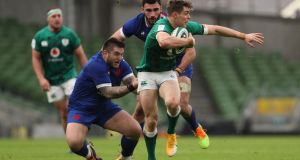 Andy Farrell and Mike Catt have made no secret of their desire to empower players more and, by the same token, in the fallout from the defeat by France have highlighted the flawed decision making when it came to identifying space in that game.

Catt, in particular, has spoken of the centres and outside backs easing the load on the halfbacks through communication from outside. While some might interpret that as passing the buck for players not passing the ball, such as when Keith Earls was in space out wide on at least two occasions in the first half, nonetheless it’s no more than the players themselves would have deduced from their own reviews.

One of those to whom this might readily apply appears to readily take all of this on the chin.

“I know I personally made the wrong decision once or twice,” admitted Garry Ringrose, widely acclaimed by his team-mates and coaches for his thorough professionalism and utter lack of ego.

“We’re close to getting there and we’re constantly working to get the best out of ourselves on that front.”

Ringrose was speaking in the context of Ireland’s attempt to play with more width and more with their heads up.

“All of us have full confidence in the coaches, and confidence in each other. In terms of building that cohesion, communication and reading each other is incredibly important, but even without communication with the guy on the ball, it’s how you react and stay connected in the moment with him.

“If you’re on the ball you’re just worrying about, say, beating your opposite man or creating that half-chance and you know the guys around you can pre-empt that and stay connected with you.

“That’s the challenge with the attack. It’s seeing the space, and each team we play defends slightly differently, have different personalities in different positions that present different pictures. It’s how we can adapt and be the best version of ourselves.

“Whether it’s strike through them, create space on the edges, putting the ball in behind to space that might be in the backfield, it’s being able to do all of it, but then in the moment making the right decisions.”

Ringrose is no different from team-mates and coaches in lamenting moments which might have changed the outcome in either or both of their defeats so far, but he doesn’t kid himself that France left chances behind.

“Was it the first lineout of the second half where they passed the ball off the head,” he said in reference to a rare blemish by Antoine Dupont.

“Had that gone to hand they’re walking in for a try. We don’t shy away from those moments where we could have been better and France could have scored.

“Even some of the decision-making defensively, when we maybe didn’t concede a try but where we weren’t dominant in how we defended. Certainly, that’s a lot of what the review process is, looking at what you can do better as a team, where you can put more points on the board. But equally, where they got points from but then also opportunities they missed. That would be something we’d look hard at as well.”

There remains a suspicion that the reviews into, say, defensive errors might not be as, eh, forensic as was the case under Joe Schmidt. In other words, does affable Andy Farrell have a ruthless streak?

“I agree he’s very personable and he has a personal relationship with each individual, which is really important and is a good quality of his. But he does have that. He steps up whether it’s in meetings or at half-time and if there’s areas we need to be better at or aren’t meeting the standards,” maintained Ringrose.

“They’re standards we set ourselves, and he wouldn’t hesitate to remind us in that ruthless fashion you’re talking about. You probably don’t see it much from him, because he is so personable, but he steps up when he needs to.”