Gatland sticks with tried and trusted for Scotland clash 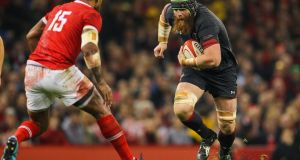 Scarlets forward Jake Ball takes Adam Beard’s place on the bench as the latter replaces the injured Cory Hill and will start for Wales against Scotland at Murray field. Photograph: Paul Jenkins/Action Plus via Getty Images

Warren Gatland says it was “a fairly straightforward selection” after making one change to his starting line-up for Saturday’s Six Nations clash against Scotland.

Ospreys lock Adam Beard replaces Cory Hill, who will miss the rest of the tournament after suffering an ankle injury during Wales’ 21-13 victory over England 10 days ago.

Although fullback Leigh Halfpenny continued his comeback for the Scarlets three days ago after suffering concussion in November, Gatland has retained Ospreys centre Owen Watkin as the outside back on replacement duty.

“After that performance against England they deserved the opportunity to back up.

“I think Leigh is still getting some games under his belt and getting some confidence back. He was good last weekend. It’s a little bit unfair on Owen Watkin to leave him out as he’s been doing a good job for us. It was a very simple selection meeting in terms of not a lot of discussion around selection.

“We’ve picked the same team apart from the two enforced changes. We didn’t talk about other players potentially coming in.”

Wales are chasing a 13th successive victory, having not been beaten since the midway point of last season’s Six Nations when Ireland toppled them 37-27 in Dublin.

If they beat Scotland and then see off Ireland in Cardiff seven days later it would secure the title and a Grand Slam in Gatland’s final Six Nations campaign at the helm.

Although they lost to Scotland in Edinburgh on their last visit two years ago, Wales won the four previous Murrayfield encounters. And they will face a Scotland side defeated in their last two Six Nations games this season, losing to Ireland and France.

Gatland added: “There is no doubt that their [Scotland’s] record at Murrayfield has been very impressive, and they are hard to beat there for any team. They will be disappointed and hurting from that performance last week against France in Paris. We are well aware of their threat.

“The [Wales] ) players that were involved two years ago [against Scotland] were pretty disappointed with that result and that performance. We’ve got a big challenge on our hands for a couple of reasons.

“One is to avenge that defeat from two years ago, but we’ve also got the bigger picture in mind of trying to win the Six Nations. We are a team that is definitely maturing. They can go through phases in a game where we are under pressure, but that doesn’t seem to rock them.

“They know that they will get an opportunity at some stage in the game. The maturity in the team, not panicking and having that belief that they can come through and win a game. That’s been massive for this team. I don’t see any fear in their eyes or any trepidation.

Wales last won the Six Nations in 2013, with their latest Grand Slam being clinched the previous season.