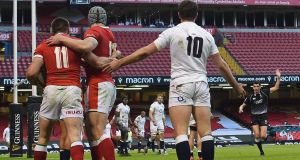 Wales’ Josh Adams is congratulated by Jonathan Davies as England’s George Ford appeals to referee Pascal Gaüzère after Adams scores their first try during the Six Nations match at the Principality Stadium in Cardiff,. Photograph: Paul Ellis/AFP via Getty Images

Gaüzère has spoken to World Rugby’s head of match officials Joel Jutge about “two unfortunate events” as Eddie Jones’s team saw their title defence come to an end at the Principality Stadium.

The French official awarded Wales two controversial tries in the first half that enabled the hosts to power into a commanding 17-6 lead.

For Josh Adams’s opener, Gaüzère told England captain Owen Farrell to speak to his team over their discipline and then quickly restarted play, allowing Dan Biggar to hoist the scoring crossfield kick.

And the second try on the half-hour mark was also highly dubious as Louis Rees-Zammit appeared to knock-on during the build-up.

“I believe one has to be transparent and not let things drag on and say what one thinks,” Jutge told Midi Olympique.

“There were two unfortunate events during the match which were tough cases to handle. Pascal Gaüzère recognised as such when he spoke to me on the phone.

“With regard to the second try, I think there is a tendency to refer to the TMO too often when one can make the call oneself on the pitch and stick with it, which if Pascal had whistled for a knock-on there would have meant no appeal by the TMO to review it.

“Pascal was the first to admit to this when he rewatched the match on Sunday. When one commits an error one should be transparent about it. Despite this he is still an excellent international referee.”

England have chosen not to submit a formal complaint to World Rugby over the two tries and were ultimately well beaten despite the blunders, the first of which was described by their former captain Martin Johnson as “absolutely appalling”.

Matsuyama makes Masters history for Japan; Irish rowers win gold and silver 07:24
Leo Cullen: ‘a good chunk of the guys who are injured will be back’ 06:15
Rachael Blackmore’s Grand National victory resonates around the world 06:00
Louis and Robinson may have died broke but their legacy is timeless 06:00
Potential of Parsons and Wall put French and English on notice 06:00
Crossword Get access to over 6,000 interactive crosswords