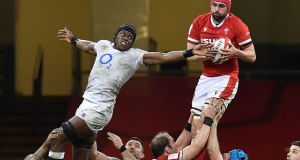 Wales’ Cory Hill wins the ball from England’s lock Maro Itoje in the lineout during the Six Nations clash at the Principality Stadium in Cardiff. Photograph: Paul Ellis/AFP/Getty

Eddie Jones believes Maro Itoje can be too heavily scrutinised by referees following his role in Saturday’s ill-disciplined defeat by Wales but England will not be making an official complaint over the French official Pascal Gauzere, despite two highly-contentious tries in Cardiff.

England were left fuming after Josh Adam’s opening try and similarly displeased by Liam Williams’ score soon after but Jones bit his lip when addressing Gauzere’s performance, instead highlighting their inability to stop infringing during the 40-24 defeat.

England shipped 14 penalties in total, including three in quick succession in the final 20 minutes – all kicked by Callum Sheedy, who revealed Wales “knew if we could choke them enough, they would get ill-disciplined”.

Itoje was the chief culprit with four penalties against him in the opening 28 minutes – and a costly fifth in the second half – and while some were borderline, Itoje habitually treads a fine line between pushing the boundaries and overstepping the mark. In total, he has conceded 10 in England’s three matches.

Jones has recently endorsed Itoje as a potential British & Irish Lions captain but it remains to be seen how Saturday’s performance will influence the thinking of Warren Gatland, who was at the Principality Stadium.

And comparing Itoje to the former Australia flanker George Smith, who won 111 Test caps, Jones said: “He is one of the best players in the world and he plays the game on the edge. Sometimes the referees tend to over-referee a player like him.

“At the same time, there are areas of the game he needs to tidy up and he knows that. He’s a good boy. A good player. There are just a few things in his game he needs to tidy up. There are some individual issues [with discipline], which will be dealt with on an individual basis. On a team basis, the biggest thing was the roll away in the tackle. We will just have to do more additional work in that area.”

Wales’s first try came when Gauzere instructed Owen Farrell to speak to his team-mates about their ill-discipline before promptly restarting play, allowing Dan Biggar to kick a penalty across field for Adams to score with a number of England players out of position.

Farrell was furious at the time and the former England captain Martin Johnson, on duty in Cardiff as a TV pundit, labelled the incident “appalling refereeing”.

England’s frustrations were compounded when Wales’ second try was awarded after consultation with the TMO, despite an apparent knock-on from Louis Rees-Zammit in the build up, but it is understood no official complaint will be made to World Rugby.

Two years ago, Jones raged at Gauzere after Wales scored a try similar to Adams’ on Saturday, catching England cold in a World Cup warm-up match. That prompted a law amendment by World Rugby because England’s temporary replacement for Willi Heinz had not yet entered the field of play.

It is understood, however, that World Rugby considers Adams’ try a matter of Gauzere’s “management” of the game rather than an application of the laws. In addition, Jones will still have the chance to voice his opinion as part of his input into the official review of the match officials – as is standard practice – and Gauzere could be dropped from future internationals if his performance is deemed to be unsatisfactory.

The upshot is that England have now lost two of their first three Six Nations matches and are out of the running for the title. With the squad given the week off, Jones yesterday attended Bath’s victory over Northampton before preparing for matches against France at Twickenham and Ireland in Dublin remaining.

“Everyone is going to have an opinion. Some might be right, but we just have to make sure we listen to what is important and the important thing is what goes on in the team. We know how hard we are working and we know what direction we are going in and we will get out of this.”

There is, however, a degree of doubt over England’s match against France on Saturday week with the French sports minister, Roxana Maracineanu, threatening to pull Les Bleus from the Six Nations amid an ongoing investigation into the Covid-19 outbreak within the camp.

Maracineanu gave France dispensation to take part in the tournament last month but there is increasing acrimony over the cause of the outbreak.

Wales meanwhile, moved above France in the table and, provided Maracineanu shows leniency, look set to head to Paris on March 20th chasing the grand slam, with a trip to Italy seven days earlier.

But the captain Alun Wyn Jones said: “There is no talk of [the grand slam]. Italy historically get better as the competition goes on. They will be hurting from the defeats they’ve had, so that is our next focus.”