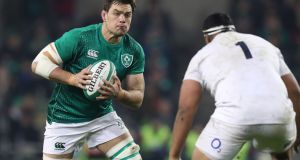 In light of Devin Toner joining Iain Henderson and Tadhg Beirne on the sidelines, Quinn Roux is set to assume a leading role for Ireland in their must-win Six Nations encounter with Scotland at Murrayfield on Saturday in what will be the biggest test of his career to date.

Capped nine times since his debut against South Africa in Johannesburg in the summer of 2016, the 28-year-old will be making his first Six Nations start after a third championship appearance off the bench against England last Saturday.

Losing three from their original stock of five locks, as well as CJ Stander (facial injury) and Garry Ringrose (hamstring) would normally be a damaging blow for most teams, but scrum coach Greg Feek believes Ireland will still have the cohesion to cope.

“Well, we had that camp in Portugal and a lot of those guys had a run there, so I think it was the first week where it would have been difficult. But guys are always in and out, the culture we have is that the locks will be talking to each other anyway, they’re involved in everything.

“Quinn has really stepped up in terms of calling the lineouts, leading the team and on the field, he’s slotting in when he’s had to pretty well,” said Feek, who stressed “for us, it’s always been about the collective.”

“Quinn did really well at the weekend, he came on and put a couple of big hits in. He’s been leading the lineout in Connacht this year, he’s really progressed there and matured as a player. He’s been in our environment since the South Africa tour (in 2016). He’s good in the scrum and mauling. As a tight forward he ticks a lot of the boxes. Luckily for us, we have good depth there at the moment.”

Initially, Ultan Dillane had been recalled ahead of Roux to Ireland’s 38-man squad for the first time since last year’s Six Nations but his selection was partly with the Portugal training camp in mind.

“It was just how it fitted for that week in the end, the trainings and how we looked at losing a couple of the guys – Hendy was late – so things like that get guys in,” said Feek.

Dillane will presumably be on the bench, and thus in line to earn his 12th cap, and first since the Fiji game in November 2017.

Feek said that Henderson (broken thumb) is “a wee way away” whereas Beirne might come into the reckoning for the round three game against Italy in Rome. Toner and Ringrose are only ruled out this week for the time being.

While Jack Conan and Seán O’Brien are the leading backrow options, Joe Schmidt could re-unite Robbie Henshaw with Bundee Aki in midfield while recalling Rob Kearney, or promote Chris Farrell or Will Addison.

They probably haven’t had the adversity that I as a coach, along with Joe and a lot of the other players, have been through before. It does build a bit of resilience

Some of this squad also face a new mental test. For Aki, Jacob Stockdale, James Ryan, Joey Carbery and Jordan Larmour, this was only their second defeat in international rugby, following the first Test in Australia, while for Andrew Porter and John Cooney it was a first.

“They probably haven’t had the adversity that I as a coach, along with Joe and a lot of the other players, have been through before. It does build a bit of resilience,” said Feek.

“In saying that, when you win often it gets contagious as well. That’s where guys that have been through it can teach those guys how it is. We can provide that as well in terms of how to deal with it, turn the page and move on.

“Everyone is quite hard on themselves in terms of losses as well. We all put our hands up and say ‘we didn’t do this right or that right’.

“Those young guys will be looking around saying ‘this is a new experience’, ‘I need to make sure has this been happening for a while?’ There could be all sorts of questions being asked but let’s not dwell on them too much. We have to learn and turn and go.”

Not least, having gone from favourites to 13/2 shots, if they are to retain what are now faint hopes of the title.

“It’s a must-win,” admitted Feek. “Again, you don’t survive in this environment if you can’t handle the pressure. You’ve almost got to look at it, hold on to it and run with it; you know?”

“So, that’s all part of it. These guys go through a lot of emotions, you don’t know what they’re thinking. You just try and help with that preparation as best you can. Sometimes adversity needs to be thrown in there as well.”