Joe Schmidt has a number of selection puzzles to solve 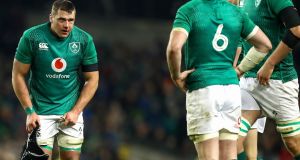 Not for the first time Joe Schmidt has earned himself a selection puzzle ahead of Ireland’s second Six Nations match against Scotland on Saturday with CJ Stander’s injury rumbling on as well as question marks hanging over lock Devin Toner, winger Keith Earls and outside centre Garry Ringrose.

Officially the Irish number eight will be unavailable for up to four weeks with a facial injury to his eye area, despite having played on after an early collision with England flanker Tom Curry. A social media post from a relative said Stander had two fractures to his face.

“Not the result we wanted but an incredible experience nonetheless and proud of @CJStander playing 62 mins with two fractures in his cheek and eye socket,” said Stander’s brother-in-law and former Olympic gold medal winning swimmer Ryk Neethling on Twitter.

Medical websites advise players with similar facial fractures not to return to full contact training or competitive games for 40 days, significantly longer than the 28 suggested. In combat sports the recommendation is no less than three months.

As it stands a four-week layoff would keep Stander out of the games against Scotland in Murrayfield and Italy in Rome but available for Ireland’s match with France on March 10th in Dublin.

Earls suffered a hip pointer injury and will be managed across the early part of this week. Depending on the severity it can take one to three weeks.

Toner aggravated an ankle injury and Ringrose reported some hamstring tightness. Both players will be further assessed by the Irish medical team over the coming days.

The IRFU also said that utility back Andrew Conway presented with some calf tightness following training last Thursday and will rehab with Munster this week.

It all adds up to some shifting around of personnel as Ireland seek a must-win meeting with Scotland in Edinburgh on Saturday. As of Monday the IRFU said that no new names had been drafted into the squad.

Stander’s replacement at the back of the scrum can come from a number of players including Seán O’Brien, who came on against England for the number eight after 64 minutes, Jack Conan, Rhys Ruddock and Ulster’s Jordi Murphy, all in the original squad picked in January.

If the injury to Ringrose keeps him out of playing at outside centre at the weekend, a number of names come into the reckoning. Bundee Aki and Robbie Henshaw could rekindle their Connacht pairing in the centre with Ulster’s Will Addison or Rob Kearney coming in at fullback.

Equally Henshaw could stay at fullback with Aki remaining at inside centre and Munster centre Chris Farrell coming straight into contention as a direct replacement for Ringrose. Equally Jordan Larmour comes into focus if Earls is unavailable on the wing.

Leinster winger Adam Byrne was added to the Irish contingent’s training camp in Portugal prior to the beginning of the Six Nations, with Kearney and prop Jack McGrath remaining with their provinces in order to gain extra game time. Byrne was then omitted from Schmidt’s final squad.

Locks are also thin on the ground if Toner is not an option. He would join an injury list with Tadhg Beirne, who was ruled out for the first two rounds and Iain Henderson, who suffered a finger injury with Ulster.