If Ireland can swerve injuries, pre-tournament fixtures will have served a purpose 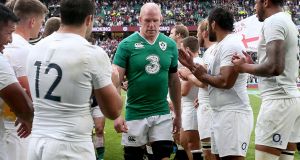 Prior to the inaugural 1987 World Cup, the IRFU in their then wisdom decided that the best preparation was to wrap their front-line players in cotton wool for almost two months. Innocent times.

Far from organising a warm-up match or two, the union decreed that all the players involved in their concluding game of the 1987 Six Nations, a 15-11 win over Wales in Cardiff on April 4th, would not even play for their club sides for the remainder of the season. Whatever else, no front-liner was going to suffer an injury anyway.

Their next game was the World Cup pool opener against Wales in Wellington on May 25th. Ireland, rusty and lacking sharpness, lost a dull game 13-6, thus condemning them to a quarter-final against the co-hosts Australia in Sydney’s Concord Oval, which they predictably lost 33-15.

That was an unexceptional Welsh side, who were flattered to finish third after beating the deflated Wallabies in the third-place play-off following their dramatic semi-final loss to France. Wales beat an equally unexceptional English side in the quarter-finals before losing 49-6 to New Zealand in the semis.

We’ve come a long way since then, albeit gradually. There were no warm-up games before the 1991 and 1995 tournaments either, while there was only one warm-up game, at home to Argentina, prior to the 1999 tournament.

There were three in 2003, although this was curiously reduced to two games prior to the 2007 World Cup. However, the matches against Italy and Scotland were supplemented by a hastily arranged, not so friendly encounter, against Bayonne.

In light of that, it wasn’t until the 2011 World Cup that Ireland arranged four warm-up games, and again in 2015 and this year. It is now the perceived wisdom too, with all of the world’s top 10 countries playing a minimum of four warm-up matches apart from France, who are restricting themselves to three.

Whereas the southern hemisphere quartet are engaged in an abbreviated Rugby Championship, the results over the next five weeks in the northern hemisphere will be mere footnotes in history.

And history also strongly suggests that four warm-up games are the bare minimum, even if this does come with the heightened risk of injury. Yes, they’re somewhat phoney before the real thing. Yet they are a necessary evil.

Ireland appeared to be keeping their powder dry during that defeat in Twickenham, with Joe Schmidt quick to remove any players with the slightest of niggles. As a result, Ireland spent the last 10 minutes minus a back and with nine forwards on the pitch after one of the more unusual replacements we’ll ever witness – Tadhg Furlong coming on for Simon Zebo.

Psychologically though, this Irish squad appear in need of a restorative few wins to generate some momentum for the pool stages in Japan following an anti-climactic Six Nations defence that was bookended by those damaging defeats at home against England and away by Wales.

Certainly it would be preferable to at least bookend these warm-up games by winning the home matches against Italy and Wales. Beating the Six Nations Grand Slam champions, ideally at a sold-out and relatively feverish Aviva, would be a particularly helpful way to send the Irish squad off to Japan before the pivotal opener against Scotland just a fortnight later on Sunday, September 22nd.

Since that aforementioned case of 1987, only once subsequently were Ireland pitched into what amounted to a pool decider in their opening game, when beaten 43-19 by the hosts New Zealand in 1995 in Wellington.

Granted, the decisive pool game in terms of qualifying for the quarter-finals was the 24-23 win over Wales in the same city, but the point is that Ireland’s World Cup draws have tended to allow them ease their way into the tournament.

This allowed Ireland to further fine-tune their combinations before producing their best performance in the pool finale against France. Of course, no less than the French, the draining effects and injuries arising from that brutally tough pool decider left both squads primed for the picking against Argentina and New Zealand a week later.

By contrast, the All Blacks and the Pumas met first up in their group, allowing them to use subsequent pool games against Georgia, Tonga and Namibia to be perfectly primed for the quarter-finals. On the same day that Ireland and France were pummelling each other, the Pumas rested a dozen front-liners when scoring nine tries against Namibia.

So having the Scots first up, followed by Japan, and then Russia and Samoa, should thus be preferable come the quarter-finals – provided Ireland hit the ground running in Japan. And if there’s one relatively disconcerting trend under Schmidt, it’s that Ireland can occasionally be slow starters if then peaking as a campaign progresses. No such luxuries this time.

Hence, if Ireland arrive in Japan with a few, or preferably, four, strong performances, then great, and ditto with couple of good wins, or more, especially at home.

If Ireland also avoid injuries to key men, or better still by some miracle escape any casualties at all, and arrive in Japan with a squad of 31 fit and relatively match-hardened players, then the warm-up games will have achieved their primary purpose.