Leinster backrow gets through impressive 50 minutes against Saxons in Cork 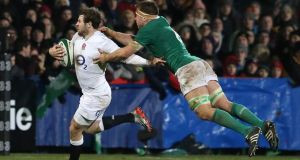 The Cork sporting public enthusiastically welcomed international rugby back to the city, filling the redeveloped Musgrave Park to its 8,200 sell-out. The pitch looked resplendent and although the result was not of a primary concern to the watching Irish management, the disappointing defeat of a strong Wolfhounds selection palpably disappointed the home crowd.

But the outing served its purpose. By far the sight of the night, from the perspective of the crowd and Joe Schmidt, was that of Seán O’Brien putting himself about with his familiar gusto. He looked for the ball and for work continually, never shying away from contact or, indeed, reacting unfavourable to it.

In his first international for 14 months and first game since September, he has assuredly played himself into the 23 for Rome (and perhaps at a push the starting line-up) and likewise the exceptional talent that is Iain Henderson.

Henderson, who was probably earmarked for an early shower but for Mike McCarthy injuring himself, was still putting himself about and winning turnover penalties in the last five minutes after a typically all-action night – excellent carries, big hits, good clear-outs, athleticism in the air. He was excellent.

Richardt Strauss and Dominic Ryan also showed up well although it’s hard to see how they can force their way into the Roman 23, while the watching Schmidt & co would have been glad to see the two props come through a decent 50 minutes or so, particularly at scrum time.

The Irish back play, it has to be said, was unexceptional. The 9-10-12 axis didn’t really work and there were a few laboured Leinster loops which were generally conducted behind the gain line and did little to check English defenders who pushed up hard – often, admittedly, from a starting point well in front of the hindmost foot – and then drifted across without having to over-commit.

Kieron Marmion looked a little unsure of himself and Madigan seemed to be taking the ball a little too deeply. England’s back play was better although Elliot Daly was much more sure of himself than Sam Burgess, who remains a work very much in progress.

It wasn’t a good night for the Leinster wingers, Luke Fitzgerald crying off beforehand with a stomach bug and was soon followed by Fergus McFadden with what appeared to be a rib injury, so that Andrew Conway – initially not in the 23 – was on the field inside the first quarter.

It was an altogether better start for the Leinster wing-forwards though, as Ryan and O’Brien kickstarted their industrious displays when the former stopped Burgess – with his first touch at international level in rugby union after six matches in this code – and O’Brien was over the ball for a poacher’s penalty.

O’Brien, showing up for carries as well as tackles, unintentionally won another penalty when high tackled, then ran hard and straight into contact and then bounced to his feet after a big hit by the equally prominent Strauss to win another penalty before pushing the pantomime villain Chris Ashton in the face. He was possibly playing to the gallery a little bit there, and soon after he made a big hit on Thomas Waldron on the far side that left both clutching at the cold night air, the Leicester number eight reaching down to the ground. And all this in the first 15 minutes.

Curiously, Irish rugby is suddenly raining ‘13s’ and there was soon also further evidence of Keith Earls’s footwork and strength in the midfield traffic. This was followed by a reminder of Henderson’s footwork in contact, which is exceptional for a lock especially.

Their scrum and lineout were both making inroads as well, but England drew first blood when the Irish defence was perhaps a little too stand-offish in waiting on the gain line as the Saxons went through the phases for Daly to make inroads out wide and Henry Slade crashed over. He missed the conversion but tagged on two more penalties either side of one by Madigan left it 11-3 to the Saxons at the break; McCarthy compounding a no-arms tackle by dazing himself in the process and departing.

Madigan landed two more penalties in the third quarter to trim the lead to a couple of points as many of the Irish heavy-hitters were withdrawn. O’Brien, Strauss and the two props all departed by the hour – leaving Ireland with a front row of two Kiwi props either side of a South African – and Henderson would surely have followed had McCarthy not already been injured.

Amid the scrum lulls, and there increasingly more, the Musgrave Park crowd managed a rendition of The Fields. Unrelated, assuredly, a little while later Ireland put together their best spell of continuity through innumerable phases to penetrate the Saxons’ 22 – there was one clever dummy and snipe by Boss, as well as carrying and clearing out with intent – before the move was undone by a White knock-on to groans from the crowd.

The anti-climactic night was finished fittingly when Christian Wade rewarded another bout of Saxons recycling to skip over in the game’s last act.

Relegation looms for West Brom after Newcastle stalemate 14:14
Rangers crowned Scottish champions as Celtic slip up 13:59
Roger Federer aiming to be ‘100 per cent’ fit for Wimbledon 13:16
Sanita Puspure’s unstinting dedication has defied her late starts 08:00
Tin Cup: A box office hit that played its way into part of golfing fabric 08:00
Crossword Get access to over 6,000 interactive crosswords