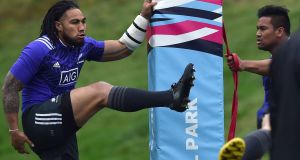 New Zealand centre Ma’a Nonu (left) and wing Julian Savea take part in a training session at the Pennyhill Park Hotel in London on Thursday ahead of their World Cup final against New Zealand at Twickenham. Photograph: Getty Images.

Ma’a Nonu has always been a phenomenon but maintaining that explosiveness, or being bothered to live up to his talent, took a little longer.

The eye make-up is gone. So are the dips in form that compelled Graham Henry to exclude him from the 2007 World Cup squad.

Since 2008 he’s been the untouchable master of New Zealand’s inside centre slot.

Now, on Sunday, he will be gone from the black jersey he’s worn 102 times with such distinction that the greatest ever crossover player from Rugby League hasn’t been able to get his game.

That Sonny Bill Williams is restricted to being an impact sub, probably the greatest ever in fairness, must make Nonu the best 12 of them all. Ever.

Up on a Twickenham stage before the semi-final he glowered down like a caged lion when quizzed about Dan Carter’s greatness.

But who cares. What he did to Damien de Allende will turn the young Springbok 12 into a better defender. He stood him up like no one else could when creating Beauden Barrett’s momentum shifting try in the semi-final. But a question about what it means for him to be an All Black provoked a genuine response.

“Rugby is a big part of how we grow up, it’s part of our history, it’s part of who we are as men. It’s what we strived to become.

“When you become an All Black it is more than just playing rugby, it is representing your country, your family. Kids now aspire to that.

“When you’re a professional rugby player you play against the best sides in the world, it’s all rugby players want to do, play footie with your best mates. Go into battle.”

There is nobody even remotely like this working class son of Wellington.

“My parents came from Samoa yet they didn’t know each other,” he told Sky NZ TV earlier this year. “They met at a factory, at their work. It was my mum’s first day and my dad’s last. He got fired that day. I don’t how they met but it was at the factory, must be the baby factory of something.”

That dry sense of humour is always there, especially when he’s around his fellow Samoans.

It wasn’t until I went to (Rongotai) College that I wanted to play for New Zealand.

Nonu arrived into an unbelievably free-flowing Hurricanes backline in 2003.

Tana Umaga, Jonah Lomu and Christian Cullen were inside and outside him with this muscular blonde tinted dreadlocked kid immediately identified as the type of player who could gradually shift from wing to centre to second five eight in the same fashion that Umaga did.

It took a little while longer than expected but he’s surpassed the great All Black captain for achievements and will continue to follow Umaga’s career path when joining Toulon next month.

A Matt Giteau-Nonu-Mathieu Bastareaud combination should be interesting for Leinster to unlock in December.

“I respect Gits as a player. Seen him play the last three years over in France and I think he is playing his best footie in a Wallaby jersey. He can kick off both feet, he’s played flyhalf as well.

“A dangerous player in terms of putting ball in the back field and setting up plays. I think he’s probably the best defender at 12 at the World Cup.”

High praise. But it means Nonu can go out and break the best defender at the World Cup.