New Ireland cut their teeth in facile US Eagles win 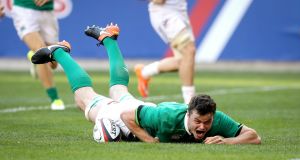 Ireland’s James Ryan scores a try just after his introduction in the second half. Photograph: Ryan Byrne/Inpho

A US Eagles team stocked with collegiate athletes proved no match for Ireland’s coming generation. None at all, and Joe Schmidt presumably knew as much long before his squad landed at JFK airport.

Schmidt talked this week about “building the base” ahead of Japan 2019 - where they fly long haul in a few hours - but the 51-year-old precisionist has never been one for handing out unearned minutes.

He surely knew this would be a stroll and so exposed Jacob Stockdale along with four other new caps - James Ryan, Andrew Porter, Dave Heffernan and Rory Scannell - to these ridiculously humid conditions.

Even considering the healthy 22,370 crowd, rugby remains a hard sell in America after this. It will be interesting to see if NBC bother.

Recruiting John Mitchell was a genuine coup, being a former All Black (and Garryowen) coach, in the first place but he hits the road next month.

For all Ireland’s efficiency and accuracy - Joey Carbery’s all round kicking excluded - the gift of tries came early and regularly.

The Americans can’t tackle. Well, run straight at them and the endeavour was honest but once Ireland brought some ingenuity, mainly through Keith Earls, the hosts looked utterly clueless.

Without their European based players (almost all of them cried off) - AJ MacGinty at least showed well against his native land - the US will never compete with a Tier One nation. Not a hope.

To the details, which amounted to little more than a procession of tries.

Not two minutes were played when Cian Healy’s textbook turnover saved Carbery’s blushes when his attempted dink out of the Ireland 22 had this collection of early twenty-somethings under pressure.

A US handling error was quick to allay any fears as Tiernan O’Halloran easily evaded David Tameilau to release Earls.

Carbery, only taking the kicks from the right, was well off target.

The phony war didn’t last long: O’Halloran’s poor grubber ruined another certain Earls try while MacGinty’s offload in contact came to nothing due to skill deficiencies on behalf of his teammates.

That brought us up to 14 minutes and a well worn Schmidt move; Carbery’s inside pass sent Earls streaking clear and the winger’s lovely pass put Stockdale over for a try on debut.

Earls was running riot, claiming his second try on 18 minutes before Carbery’s mini-disaster put the Eagles on the board. Another slow motion chip out of his 22 was blocked by the long arms of Nic Civetta.

The lock regathered to fall over the line. But that was the height of competitive viewing.

Rhys Ruddock spared Carbery a kickable shot at goal as Ireland turned to their trusty maul. Niall Scannell came up with the spoils. Carbery missed the conversion but found his range after Marmion and Earls made fools of the American defence once again.

Not long after the break, Jack Conan drove the Irish scrum over but Carbery’s nightmare continued. Another blocked kick, this time by Cork-born flanker John Quill, led to a second US try which MacGinty converted.

With Rory Scannell in for Luke Marshall there was no chance of the Sheppard’s Hook but Carbery was forced off moments later with an injured right leg.

The US snatched another try through centre Mike Te’o (no relation to Ben) before James Ryan’s arrival on the hour mark.

This 6’7” kid was always a special locking talent up the age grades for St Michael’s and not 60 seconds after following Michael Bent and Brian O’Driscoll into a unique club of being capped by Ireland before Leinster he went one better.

Earls gets the Lion’s share of credit once again as, having stepped and squeezed through an invisible gap, he offloaded for the 21-year-old to gallop over.

Rory Scannell missed the conversion under the posts but place-kicking is an unneeded luxury against amateurs (Paddy Jackson rejoins the squad in Japan).

Luke McGrath and Simon Zebo brought the try count up to 11 (nine-two) on a night that Irish rugby will remember, simply because it was the moment James Ryan, Porter and Stockdale arrived in the green jersey.

Add Ringrose, Carbery (this was, a perhaps necessary, blip), Josh van der Flier, Dan Leavy; and Schmidt has names to build an era around.

Laytown beach races cancel September meeting due to coronavirus 16:24
Racing regulator happy with screening protocols despite high-profile breaches 15:50
McNamara hopeful that Ireland under-20s will get to compete for Grand Slam 15:32
GAA dressing rooms to remain closed until further notice 12:10
Aidan and Donnacha O’Brien banned from racecourses for Covid-19 breach 09:49
Crossword Get access to over 6,000 interactive crosswords