Nerveless Sexton is once again the man of the moment 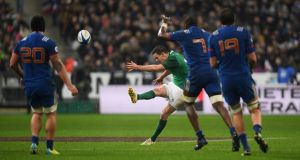 Jonny Sexton drops a long-range goal to for Ireland in the final play of the game to secure a victory against France. Photograph: Mike Hewitt/Getty Images

“He’s a serious leader,” shrugs Dan Leavy. “He’s a competitor. He’s always on to refs, trying to get decisions our way.”

Paris on this greasy Saturday evening in February and the increasingly complicated solution for suspected concussions sees the clock pause at 75:31, for what seems an eternity, as Nigel Owens seeks clarity.

Dupont stays on the ground near the ruck so Owens has to halt play.

The Welsh referee leans over the Toulouse scrumhalf before signalling for a head injury assessment (HIA).

Owens: “The match doctor is saying it is definitely a HIA [for Dupont] because otherwise the nine [Maxime Machenaud] cannot come back on?”

Owens: “You are telling me it is a HIA?”

Owens: “Wait a minute. Will you go back please.”

Sexton (pointing to his own chest): “I’m the captain.”

Rory Best has been replaced by Seán Cronin.

Owens: “Go back please. I know you’re the captain.”

Owens (to Charabas): “You are telling me it is definitely from the match doctor, the official match doctor, is saying it is a HIA?”

Owens: “Is that correct?”

“Nigel . . .” Sexton marches after Owens to remonstrate: “No one else said [HIA] until you said it.”

“No, it came from the touchline, from the AR [assistant referee]. Back you go please.”

The Six Nations stated on Sunday: “The HIA review processor is reviewing a number of incidents from the France v Ireland match in the senior men’s championship.”

The seconds start ticking when Machenaud returns to feed the scrum near Ireland’s 22. John Ryan, under pressure from Dany Priso and Adrien Pelissie, breaches like a dolphin.

French forwards embrace as if the contest is over but it has only just begun. Toulon’s Anthony Belleau – and not Machenaud as since the Bloodgate scandal an enforced sub cannot place kick – bottles the penalty.

Unforgivable and unforgiving, Sexton catches the ball and on 77:28 drops off low for Iain Henderson to regather and stumbles toward the 10-metre line.

Finally, after 25 phases and with 80:28 on the red clock, Sexton risks everything by chipping to the right touchline. “I think Keith Earls jumps four metres in the air,” Joe Schmidt tells anyone who’ll listen later that night. Earls catches the ball over Virimi Vakatawa and dances inside Henry Chavancy.

Sexton is finally in range, on the French 10-metre line, but there is another problem. Dan Leavy steps into first receiver because Sexton is on the ground stretching his left calf.

Dev Toner, Peter O’Mahony and Jack McGrath carry and ruck for a combined loss of one metre. The ever-willing CJ Stander goes nowhere.

Sexton reappears to give Bundee Aki a gallop. A Fergus McFadden missile cleans a ruck. Leavy and O’Mahony carry and ruck.

On phase 37 Sexton catapults Henderson over the gainline before dropping into the pocket. The die is cast. When Henderson, then Stander make leg pumping yardage Murray knows the moment has come. The pass is crisp. The 42-metre drop goal true.

“Johnny obviously has the biggest balls on the planet,” says Leavy.

TV3’s Sineád Kissane is granted the only Sexton interview.

“We could have put it to bed with the [fifth] penalty but I snatched at it. I just wanted one more chance. I’ve been in that position before when you don’t get another chance.”

And while he was at it: “Scrappy game with the conditions and the way Nigel reffed it, it was very scrappy. We let them come in off their feet at times. We got a couple of decisions against us but we stuck in there.

“If we get what we want to get in the championship we’ll look back at those last 10 minutes and the character we showed to dig in.”