Conor O’Shea undaunted by the scale of the Italian job 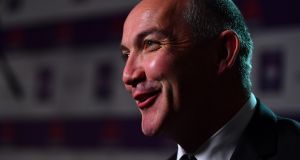 Conor O’Shea: 'I believe you can win any game at any time. It doesn’t matter what sport, because it’s two teams.' Photograph: Dan Mullan/Getty

Once again Italy appear to have drawn the short straw. First up they face England in Rome next Sunday, before just a six-day turnaround before playing Ireland in the Aviva Stadium, albeit England have as well before hosting Wales. But this is an altogether bigger demand on the -Azzurri.

Conceivably the Ireland game could not only mark Conor O’Shea’s first match against his native country on Irish soil, but Ian McKinley’s as well, which would be quite a poignant day and a particularly memorable one for the Dublin-born and reared St Columba's product and his family.

McKinley’s remarkable story has been well chronicled. Six years after losing his sight in one eye, the 27-year-old has steadily rebuilt his career in Italy to the point where he made his international debut for his adopted homeland in their November win over Fiji in Catania, kicking the three-pointer which sealed their 19-10 win.

He earned two more caps in the games against Argentina and South Africa, and as one of three outhalves in the Azzurri squad for their opening two games along with Tommaso Allan and Carlo Canna, McKinley has long since wanted to be treated like everyone else.

As he puts it himself: “I’m happy when people refer to me as Ian McKinley, they don’t refer to me as ‘the goggle guy’ because maybe that’s what it was like at the start.”

“It’s an amazing story but Ian would hate it if either of us were talking about him being a nice story,” said O’Shea, when sitting alongside Sergio Parisse at last Wednesday’s Six Nations launch in London.

“He hates that. He’s a rugby player. He’s shown unbelievable resilience in his own battle to get back to where he was; when he came to Italy and going up through the junior clubs and getting a chance at Zebre, and then going to Treviso. ”

“There was a tackle he made on Duane Vermeulen,” added O’Shea, in highlighting a moment in Benetton’s recent European Champions Cup meeting with Toulon, “and he is just textbook in what he does because his technique has to be absolutely spot on. So he’s learned so many things, even his goal-kicking; if you think of the difference in his goal-kicking and how he does it. I think he’s a fabulous example to a lot of people of character, and never giving up.”

“But he is judged for selection on who is best for the job, and not because he’s Ian with a good luck story that everyone likes. He’ll be judged on ‘is he the best person for us, to play against England, Ireland etc?’ But think of where he’s come from, and where he is now, and it’s amazing.”

Briefly interrupted by a call from David Wallace (“he must be looking for something”) O’Shea then discussed McKinley the rugby player.

“He’s very organised. I sat down with him last year and he was asking me what he needs to do to get into the international set-up and he’s just very organised. If you give him a plan he will deliver that plan. He knows it inside out, and as Sergio would say he speaks absolutely perfect Italian with an Italian accent, unlike my imperfect Italian with an Irish accent.”

“So he can lead a team around the place, but as I say he’s not a good luck story now. That might be something for the end of his career. He is fighting to be Ian McKinley, number 10 for Italy. That’s what he wants and we’ll judge him on who’s best.”

Veteran hooker Leonardo Ghiraldini returns, as does flanker Alessandro Zanni, who could make his 100th Test appearance against England after a two-year absence. The only uncapped player in the squad is the 23-year-old Treviso prop Marco Riccioni, but 17 of the 31-man squad are 25 or under, and 19 have eight caps or less.

“We’ve got some good young players, and I talk about the future a lot, but our future is now. We want, and I said it last year, to give this guy [Parisse] two more years, some more special days, because he’s had some special days in the Italian jersey, before he goes, and in ten years’ time we’re going to have this beer that we’ve threatened to have in Rome and watch a very competitive side and say ‘we were part of that’. That’s what our job is.”

Against England, Italy have lost all 23 meetings, with an average scoreline of 40-12. But O’Shea’s positivity is such that he believes Italy can win, albeit he’s realistic about the challenge.

“I believe you can win any game at any time. It doesn’t matter what sport, because it’s two teams. The reality is if they play to their best and we play to our best they win. Fact.”

“We go to Ireland the following week and if they play to their best and we play to our best, they win. So, what do we do? We have to make sure that we play to our absolute maximum. We may have to take a few risks in how we play. Sport is really weird. The energy in matches is always strange and if you score at the right time you get belief, the other team doubt, and if we have the energy at the right times and we ride our luck, that’s what David has to do against Goliath. ”

In last season’s meeting with England at Twickenham in round three, Italy used the ploy of not contesting the tackle/ruck area, and in the ensuing absence of an offside line, were thus entitled to flood the area around English scrumhalf Ben Youngs. Among many exchanges between Dylan Hartley and Romain Poite, the French referee said to the befuddled England captain: “I’m a referee, not your coach.”

Much of the post-match debate, in England anyway, was negative toward the Italian team, some even suggesting they had disgraced the game.

“I think what frustrated was that we had actually played good rugby in the match and didn’t get the credit for it. I think people came to Twickenham thinking 100 points. The mental resilience of our players are the things that give me hope, because we had a really tough day against Ireland in Rome,” said O’Shea, in reference to the 63-10 defeat at home to an Irish side wounded by their opening day defeat to Scotland.

“So for our team to come out and have the inner strength and belief to put in a performance like that two weeks later when everyone was just going ‘you’re rubbish’, that’s what I thought should have been focused on.”

Under Eddie Jones, this English squad bullishly pride themselves on their fitness levels, and when leading by only 17-15 in last year’s fixture at Twickenham against England, they scored another 19 points in the last 11 minutes.

Both Italian franchises are working hard on their fitness levels according to O’Shea, who revealed that when speaking with Warren Gatland on Wednesday in London he had said to him: “It’s funny, when you’ve got depth you can break people.”

By way of an example the Kerry-born O’Shea cited RTÉ’s recent documentary of a former Kerry Gaelic football coach to a largely bemused audience.

“For any Irish people, I was watching Mick O’Dwyer’s documentary on my laptop on the plane coming from Rome last night. He was a famous Irish Gaelic football coach and he was legendary for his fitness, and it was lovely watching the old pictures of this old team in the 1970s just sprinting on the pitches and running up the hill and stuff.

“He would get 60 people together and he would see which 15 would survive, and they’d go out on the pitch and win loads of titles. Unfortunately, we can’t do that. We have to be a bit more scientific about it but we’re getting better.”

That victory over Fiji was Italy’s only win out of 11 Tests in 2017. In last season’s Six Nations, Italy finished pointless despite the addition of bonus points and with the wooden spoon for the 12th time in 18 seasons. They have not won in the tournament since their 22-19 victory over Scotland at Murrayfield in 2015, losing 12 since.

O’Shea is under no illusions about where Italy again rank in the pecking order.

“Honestly we know that we’re the ones that will put a banana skin under somebody’s hopes in this championship. We won’t win it yet, but hopefully we’ll have a great day, or great days, during this championship.Hopefully that’s what we’ll do. .”