Cheika is said to encourage inclusivity and a tight-knit team, despite recent controversies 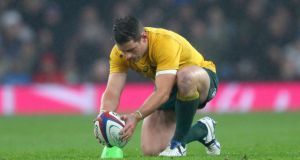 As his name would suggest, Bernard Foley has Irish roots: “My ancestry goes a long way back.” Photograph: James Crombie/Inpho

Australia is still a young country, culturally mixed and drawn from diverse backgrounds, and under Michael Cheika, the Wallabies’ players have been encouraged to reflect this and take pride in their varied roots.

Every player under his Wallabies’ watch has openly talked about their backgrounds and the reasons why they, or their families, settled in Australia.

Amid all of that, Kurtley Beale is the sole Aboriginal in their squad, and there was nothing more resonant than the Wallabies wearing jerseys with an indigenous inscription the last time they played in Lang Park, or Suncorp, last October when – as anyone in the Irish squad is keen to remind us – they beat the All Blacks.

Admittedly, there’s a political diversity too, and the squad’s harmony was tested when Israel Folau’s homophobic, anti same-sex marriage comments provoked an outcry. Such views are the polar opposite of the more enlightened David Pocock, who would not marry his partner, Emma, until same-sex marriage was legalised in Australia.

Yet although Folau remained unrepentant, last Sunday he confirmed that Pocock had instigated a conversation with him during a Wallabies camp in May on the Gold Coast to discuss their contrasting views.

“We just had an open chat about our different beliefs. We respect each other. It doesn’t change the way we feel about each other. It won’t change anything when we step out onto the field. I’ll be there to cover him and same with him. We’re 100 per cent behind each other.”

Pocock this week concurred when asked if the pair could still be teammates. “Absolutely. I’ve got family who have those views and we’ve had it out over the years. The bottom line is they’re family. You talk about it in a civil way, and when you do that you realise we’ve got far more common ground than we have in difference of belief.

“I just don’t see who wins if we aren’t able to relate to each other as humans and keep talking about things rather than having these really nasty polarising debates to decide who is and isn’t part of our tribe based on their beliefs. We all lose something when we aren’t able to engage with people just because we disagree on something.”

That said, Pocock also maintained: “Having Australia’s best rugby player using his platform like that has the potential to really harm young people who are going through some pretty rough stuff trying to come to terms with their sexuality.”

The brouhaha at the time even tested Cheika, whose response was to say that children should be more critical of their idols. He also believed Folau’s comments would not be “an ongoing issue”.

Maybe one day, but not yet, as the issue keeps rumbling. Then again, the squad evidently remains tight-knit, as outhalf Bernard Foley stressed this week.

“We would pride ourselves on that as well, because regardless of everyone’s background, number one we want them to feel included, number two we want them to acknowledge and express their backgrounds, where they have come from and the choices they have made to come to Australia, and that binds us stronger together and have a great understanding of each other.”

This, said Foley, largely emanates from how Cheika encourages inclusivity.

“What he is able to do is to get everyone in the squad to buy into one purpose, one direction. He is very smart, tactically and technically as a coach, but he is also very good at gelling his squad together, just allowing guys to be themselves but also to be part of a greater purpose.”

“I have a lot to do with Cheiks with the Waratahs and now the Wallabies. His ability to change firstly the Waratahs perception – we were underachievers at times, maybe a bit like Leinster – was impressive, and he has followed that up with his success here. That comes, number one, from ensuring guys work hard; number two getting the fundamentals right where you believe in each other, work for each other, and bond from individuals into a team.”

As his name would suggest, Foley himself has Irish roots.

“My ancestry goes a long way back, I think, before my grandparents. They were probably my great-grandparents. My father loves history, he has a passion for that sort of thing, so when I played in Ireland before, I went down to Cork to meet up with some of my distant, distant relatives as well as some friends I know down there.”

That does not make this test match any different for Foley who says, of more relevance, is suffering defeats to Ireland on Australia’s last two visits to Lansdowne Road.

Accordingly, whereas Folau said he doesn’t pay much heed to prospective opponents, and Will Genia admitted initial “ignorance” before learning to respect Ireland, Foley says he has always done so.

“Ireland have always been a force in my mind. Growing up, watching them, especially when they had the likes of Ronan, Brian O’Driscoll, Keith Wood, those guys, especially in 2002 when you beat us, and 2003, when the World Cup was on and there was that great game, they have always been considered a dominant team for us, always viewed as an inventive, creative side, which is a real credit to them.”

“So I have always considered them dangerous and you know, their hard work has paid off in the last couple of years with what they have achieved, that win over the All Blacks, the Grand Slam, and also with Leinster being European champions, it all reaffirms how good a rugby country Ireland is.”