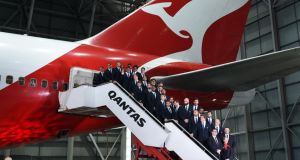 Flanker Michael Hooper will share the vice-captain’s armband with Adam Ashley-Cooper as he makes his first appearance at the tournament .

The selection travelling to England for the September tournament comprises 17 forwards and 14 backs, who have over 1,200 Test caps between them, but 2011 captain James Horwill has failed to make the touring party.

Flanker Sean McMahon and prop Toby Smith are included despite previously being absent from Cheika’s plans during the 2015 international season.

The Wallabies boss told rugby.com.au: “We’re become a really tight group and it was a very difficult process in picking only 31 players, but I know each player selected will travel to England with the full support of those team mates who won’t board the flight.

“Our primary focus throughout the Super Rugby competition, The Rugby Championship and Bledisloe Cup was to select a balanced squad between youth, experience and form and this squad certainly delivers on this.

“It’s also important that we select a squad that will handle the tournament play and our draw in particular at the Rugby World Cup, as well as maintain a strong competition for places in the team.”

Australia begin their campaign against Fiji in Cardiff on September 23 before facing Uruguay in Birmingham four days later. The two-time world champions then meet Pool A rivals England and Wales at Twickenham, London, on October 3 and October 10 respectively.