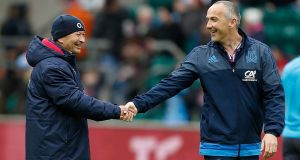 It was so much fun to watch Eddie Jones and Conor O’Shea speaking without filters to the media after the ruckus at Twickenham. Photograph: Paul Harding/PA Wire.

Original thinking in modern rugby is both rare and difficult.

Creativity in exploiting weaknesses in your opponents’ systems is common, but no less intelligent.

In the third round of what has been, by a considerable margin, the most engrossing Six Nations in many years, we were fortunate to witness both.

Conor O’Shea’s non-engagement tactics after the tackle were invigorating, if only for the fact that it really got under Eddie Jones skin. You couldn’t help but enjoy watching Eddie throwing the toys out of the cot after being caught out.

It was so much fun to watch both coaches speaking without filters to the media. Instead of the usual ‘feeding of the chooks’ - throwing out small bits of nothing at the media, while the journos cluck about and fight over the scraps that the coaches spin doctors’ have briefed them on - we got harsh, emotional honesty and I loved it. Rugby is a passionate game and both Conor and Eddie gave us their honest emotions.

In terms of skill, Italy are without doubt the poorest in the championship. The Italian tactics were used with the hope of rattling the English and it worked. This is what weak teams do in an attempt to get a mental jump on their superior opponents.

I’m a big supporter of Conor O’Shea. I’ve watched him develop and grow over the years into a powerful presence in rugby. But the task facing him in Italy appears to be insurmountable.

Having taken over a Scottish team that was at the bottom of its cycle myself, I can empathise with Conor’s situation. It’s a tough gig. The tactics Italy used against England were highly intelligent and entertaining, but in reality it’s a sign of desperation when you know your team is going to get belted by a more skilled outfit.

For the sake of Irish rugby, I hope that when Conor emerges from the other side of his Italian ‘dolce vita’ he will remain relevant to the international game.

Irish rugby will need Conor O’Shea - and Mark McCall for that matter - in the coming years.

Despite all the hype, England pounded Italy. England are exceptionally well coached. Underneath all the humour and distractions Eddie Jones is throwing around in the media - and I can see he’s having an absolute ball - he is an excellent thinker, strategist and incredibly hard worker.

For more than a year England have been the real deal. Jones deserves great credit for their extraordinary performances.

If Scotland or Ireland can defeat England, they will be worthy of all the praise that will be heaped upon them. Right now, England are very much the favourites.

The second interesting piece of creative coaching came from Joe Schmidt’s Ireland. On several occasions against France, we saw Connor Murray pass, then loop around the man he passed too. Murray did not get the ball back. The ball was dummied to him and was passed back into the space, close to the ruck, where Connor had run from. The recipient of the pass was mostly a nimble back.

This was done because modern defensive systems do not lock in the first few defenders close to the ruck. They move out, defending the wider space. The French play this system, as do most national teams. All defensive systems have flaws. We saw the French attempting cross field kicks to the gaping hole that Irelands’ system leaves wide on the flanks. That is not a criticism of the Irish system, just an observation.

All defensive systems can be broken.

The smart coach finds ways to exploit the space that the particular system exposes. The really intelligent part about the Murray runaround is that both Eddie Jones and Rob Howley have now seen it.

They will now be wondering should they leave the first defending players close to the ruck to stop that play?

If they do, there will less defenders out wide and more space for Ireland to attack. If they don’t, Ireland will keep attacking the space close to the ruck. Pretty simple and smart stuff from the Irish coaches.

Ireland’s immediate problem is Wales, and they are not a weak team. They pushed England to within a whisker of a famous victory and they rarely lose three games in a championship.

Ireland lost in Edinburgh because of poor mental preparation. They cannot afford a slow start in Cardiff because Wales will punish any Irish play that, as the great Bill McLaren would have said, is less than “tickety-boo.”

Wales have been playing with such similar tactics for so long, that their predictability can cause opposition teams to underestimate them. It also causes old coaches, like me, to nod off. My god it’s boring!

The new bonus points system has the cats running firmly among the pigeons, with three teams in the hunt for the title. Scotland go to London with a Triple Crown on the line. England can sniff a Grand Slam. Ireland have to avoid an ambush in Cardiff before springing one of their own in Dublin. The wounded Dragon needs to breathe more fire than the unruly ones in Game of Thrones. Eddie Jones is cranky and in full voice. “Mate, if the nine can’t pass the ball, its not rugby.”

It’s all so exciting, I can hardly believe I am talking about northern hemisphere rugby. Bring on the last two games.