If Joe Schmidt’s team don’t improve, this powerful England side will demolish them 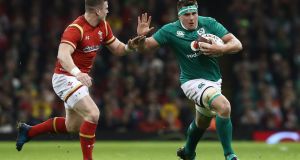 CJ Stander has been outstanding for Ireland with his powerful running, strong fends and great footwork. Photograph: David Rogers/Getty Images

In those beautiful, tingling moments before the team departs the changing-room for the intensity of the warm-up, the emotion levels remain below the realm of peak performance. Yet, your senses are wonderfully heightened.

In that addictive mental state, clarity of thought for the athlete can be at its keenest.

At this glorious time, trust is the overriding emotion present in the minds of the players from great teams.

They trust their team-mates to do their job. Great teams look at their teammates, people they may not be especially close to in terms of personal friendships, but they feel a security that their team-mate, as a rugby player, will not let them or their team down at the critical time in the match to come.

Brad Thorn, the New Zealand rugby legend, barely touched the ball in the 2011 Rugby World Cup final. Yet his team-mates voted him man of the match. His job was not to run with the ball. His job was to lift in the lineout. Push in the scrum. Tackle the big French ball-carriers. Hit rucks and clear out French defenders.

Thorn did his job, as dirty and as unglamorous as it was, to perfection, and his team-mates recognised the massive contribution that he had given towards them holding the William Webb Ellis Trophy. They trusted Brad Thorn to do his job.

At times in every Irish performance during this Six Nations, trust seems to have been absent.

This has given Ireland that most frustrating of labels. Inconsistent.

If you don’t trust someone to do their job, that means you don’t respect their ability to perform. When you have this combination, even for 20 minutes in a match, players try too hard to make up for the lack of trust. They force the play. Errors occur, then teams appear disjointed and their performance becomes inconsistent.

Only a few months ago Ireland defeated New Zealand, Australia and South Africa. The quality of the Irish cannot be denied. Yet they have underperformed in this championship.

The Ireland that played in Chicago and demolished the world champions can beat any team in the world. The Ireland who crumbled in both attack and defence at Cardiff and Edinburgh, while showing glimpses of the class we all know they have, will do your head in and fail.

From missed tackles, to a lack of attacking imagination and a seemingly uncontrollable desire to run into defenders rather than around them, Ireland were bewilderingly ordinary against our Celtic cousins.

While England traditionally hold a lot less fear for the Irish than the three teams from the south, if Ireland are once again, that most terrible of all sporting beasts, inconsistent, they will be punished on the scoreboard big time.

Ireland are at their best when they play direct rugby. It sounds so very basic, because it is. The attackers need to be running onto the ball at pace and using footwork prior to contact. Ireland must return to the powerful leg drive we saw in November, then soak it all in a bucketful of passion and rough-edged Irish aggression.

Regrettably, in this championship we have witnessed a return to the attacking habits that were so fruitless for Ireland in the last year’s Six Nations. Forwards catching the ball while stationary, with little or no footwork, so providing absolutely zero go-forward. CJ Stander is an outstanding exception to this rule. May his powerful running with strong fends and great footwork continue.

The backline’s set-play attack also has regressed. The return of the wraparounds, with Johnny Sexton getting the ball back from his centres on the outside, is simply not working. These moves were introduced by Alan Gaffney almost a decade ago. They came from Randwick rugby club in the 1980s via the Brumbies and the Waratahs.

There are too many passes. The more passes, the longer it takes for the ball to get to the strike runner. England’s Jonathan Joseph will eat this up.

Ireland need to unleash their latent talent, not stymie it with overly complicated multi-pass moves that are sending the attack across the field and giving well-organised aggressive defences, like England’s, easy shots at exposed Irish ball-carriers.

England are very good. Perhaps even getting close to excellent. It is the best English team I have seen since the 2003 World Cup winners and Eddie Jones is this team’s driving intellect. England have played really positive exciting rugby. (Yes, I am talking about England. Yes, I did use ‘England’, ‘exciting’ and ‘positive’ in the same sentence. Yes, this is a first for me.)

If Ireland do not bring their ‘A’ game to the Aviva, full of driving aggression, creative attack and endless passion, the English will demolish them.

Ireland can win. Their record over the last 12 months proves this. But it’s hard to pick an inconsistent team to defeat an excellent team, even when its Ireland, on St Patrick’s weekend, hoping to ruin the English party.