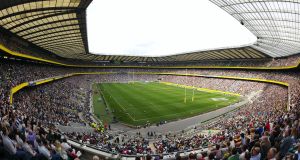 I looked over Jordan and what did I see.

There are a variety of theories how the most treasured and widely recognised African-American spiritual song found its way onto the terraces of English rugby.

Identified as one of the songs of the century by the Recording Industry Association of America, Swing Low Sweet Chariot was first recorded by the Fisk Jubilee Singers in 1909 and for over a century has been covered by various artists.

But in recent years there have been shrill voices and questions asking how appropriate it is that a revered slave song about death and the afterlife has come to be a party tune for largely white, middle-class England rugby supporters sloshing beer.

It’s probable that most in the stands who will sing the song in Dublin urging England towards a Grand Slam won’t have any idea of its cultural significance, or it’s religious and spiritual meaning.

Nor will they probably understand the song’s historical context and its association with a shameful period of American history.

Arthur Jones, a music history professor and founder of the Spiritual Project at the University of Denver recently told The New York Times that it reminded him of American sports teams such as the Washington Redskins, who use Native American names and images, and who are in a group of people who seem “to be free-associating with imagery largely disconnected from its history”.

There is no doubt that Swing Low has become, in its rugby iteration, disconnected with the history. But that may not necessarily make it inappropriate or distasteful.

“That it’s been picked up by rugby fans is mystifying,” says associate professor of American history in Trinity College Dublin Dan Geary. “It is a slave song defining the tradition of the black spirituals. How this could be performed for English rugby I don’t know.

“It’s a religious song too. It’s about deliverance from this world to a better world coming from people who experienced terrible oppression. I’m not sure if it’s inappropriate but it seems very out of place. It’s bizarre if you know the history of the song that it would wind up sung in that context.”

The England Rugby Supporters Club have produced a special songbook of their main tunes, which they urge England fans to sing, with Swing Low Sweet Chariot being first on the list.

The book called ‘Songs of Praise’ was distributed free to all supporters at the last England match at Twickenham and they gave special thanks to the fans, who provided some of the ideas and words.

“Here are some of the songs to get us all going – so crack open the beers and let’s sing,” says the supporters’ website.

When England’s Mako Vunipola, who is of Tongan descent, was made aware of its origins, he shrugged it off, telling The Daily Telegraph: “If the fans want to sing it then let them sing it, but obviously if people find it offensive then sorry.”

“Is anyone actually offended by this?” asks Prof Geary. “It’s not as though it is a racist song. This is the nature of popular culture whereby people pick up songs and appropriate them for their own uses. It’s a common enough story where you get strange histories or songs or fashions.

“If there were a lot of African Americans or black British saying that this is an appropriation of our culture, that would be another thing. But that’s not going on.”

No one is quite sure where it began or who started singing it at England games. The BBC reported over a year ago that England’s supporters were rumoured to have adopted the song when a group of schoolboys began singing it at Twickenham in 1988.

Another theory went that a group of boys from Douai School in Berkshire started singing the song at the same 1988 match, when England were playing Ireland in the Five Nations Championship, allegedly serenading Chris Oti, a black player, making the theory more controversial.

Drawing a parallel with the Redskins name or with The Atlanta Braves, who at one time had a mascot called Chief Noc-A-Homa who used to reside in a teepee in the bleachers, is, argues Prof Geary, a completely different issue.

“I don’t think it is the same thing. It’s a completely offensive name. It is a racial epithet. The whole idea of naming your team after a group of people as if they are going to be your mascot I find totally offensive.

“Like you say, the people don’t necessarily know where the song is coming from. It’s not being sung in an attempt to offend people and the song itself is in no way offensive.”

There are several theories about the meaning of Swing Low Sweet Chariot including that it conveyed a coded message for slaves to escape.

However, Horace Clarence Boyer, a prominent scholar in African-American music, believed the song is about death.

Professor Boyer, who died in 2009, told a BBC documentary it fits into that group of spirituals that say: “I would rather die than be here. Lord, just come and take me right now.”

But I know my soul is heavenly bound, Comin’ for to carry me home.