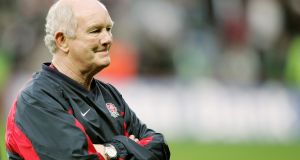 Brian Ashton remembers the sense of foreboding, even now. As an ex-head coach of Ireland he should, theoretically, have been more prepared than most for England’s Six Nations trip to Dublin 10 years ago. Even before the anthems at Croke Park, however, he had a feeling in his bones.

“I remember going on the pitch 45 minutes before kick-off. It is very rare for modern stadiums to be full that early but Croke Park was. You could have cut the atmosphere with the proverbial knife. I wouldn’t say it was scary but it was quite intimidating.”

Whatever the physical reception Grand Slam-chasing England receive from their hosts this weekend, it will be nothing compared to that 2007 fixture, switched to the Gaelic Athletic Association’s giant citadel while the crumbling old Lansdowne Road was being redeveloped. All the pre-match talk had been of ‘Bloody Sunday’, when British soldiers opened fire on crowds watching a GAA match at Croke Park in 1920, killing 14 people, and the prospect of Ireland losing to England at rugby union was out of the question.

“It was phenomenal,” recalls Ashton, reflecting on Ireland’s 43-13 victory. “I don’t think I’ve ever been involved in anything remotely like that.

“We got our preparation wrong: we talked more about events that had happened over 80 years previously than we did about the game itself. We were completely blown away by the fervour of the Irish team who were determined to make a big statement in all sorts of different ways. We just weren’t ready for it.”

Ashton is also predicting some degree of “backlash” this weekend following Ireland’s defeat to Wales in Cardiff that has allowed England to claim this season’s championship title with one round to go. As the only man to have been head coach of both Ireland and England – Andy Farrell and Mike Ford have both served in assistant capacities – he is more aware than anyone of the special psychology of this fixture, particularly with England chasing a second consecutive Grand Slam.

His experience with Ireland during the early days of professionalism, between 1996 and 1998, was not always easy but he remains the last head coach to have guided England to a World Cup final, against South Africa in Paris in 2007, the same year as the Croke Park drubbing. A decade on, he believes the game has changed significantly and that England are increasingly as well placed as anyone.

“England have made massive strides in the past 17 games under Eddie Jones. It’s quite a remarkable record, irrespective of who they’ve been playing against,” he says. “The players have stepped up to the mark since the 2015 World Cup . . . I always thought there was going to be a backlash from that group of players given what happened. There’s also no doubt England have a rich vein of talent at the moment.”

Ashton, still busy at 70 as a consultant mentoring young coaches for, among others, Manchester United, is also a fan of Jones’s insistence on hard work, disagreeing there is a danger of driving players too hard in training. “I’m a bit old school on this. I know sports science is doing fantastic things but I think that, fundamentally, rugby players don’t mind being worked hard. It’s the nature of the game. It’s a very confrontational game physically and the mental confrontation side really interests me.

“A lot of clarity of thought has been brought to how England want to play the game. Eddie seems to have developed an environment that has actually put the challenge back on the players to take some sense of ownership and responsibility for what they’re doing. I suspect he was probably quite angry about what happened in the first 40 minutes against Italy and that his players hadn’t dealt with it earlier.”

The resultant 61-21 thrashing of Scotland last Saturday has also gone some way towards showing the “ruthlessness” that Ashton felt was missing in their opening three games of the championship. “It’s that old quote: ‘We are what we repeatedly do’. Excellence is not an act, it’s a habit. It’s not a one-off. You’ve got to be excellent every minute of every day. I suspect that’s one of the things Eddie’s been promoting behind the scenes.”

Ashton also believes Billy Vunipola’s return for the final stages of the championship has made a significant difference. “Vunipola adds a different dimension now he’s got himself in really good physical condition and his ability to offload has improved,” he says. “He’s far less one-dimensional than he was 18 months ago. He’s now a real threat and I think they’ve missed him.”

The visionary backs coach who oversaw England’s all-conquering attacking rugby in 2001 and 2002 reckons Ireland, consequently, will have their hands full, but suspects Saturday’s contest will be tight even without the historical baggage accompanying Jones’s side across the Irish Sea.

“Joe Schmidt’s a smart operator and Ireland have broadened their horizons slightly; they’re less restrictive than they were. Johnny Sexton also has the ability to take the game by the scruff of the neck tactically and do the right thing at the right time,” Ashton says. “Providing Ireland can get sufficient quality ball I think it could be a really interesting afternoon. That said, I still go with England. They’re on a roll with 18 wins. Most international coaches would take that.” Guardian Service