Matt Williams: How Australia went back to the future to show New Zealand fallibility

Gainline theory has been knocking around for 90 years, but done right it’s still mighty effective 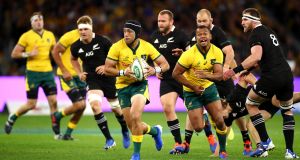 At is zenith, rugby is a game requiring supreme strategy.

The top eight teams in the world are so closely matched that only those who can execute a team strategy with excellence will win in Japan.

The current crop of matches in the northern hemisphere are important, but team selections and tactics remain experimental. We cannot say the same about the south.

New Zealand coach Steve Hansen has said that the Kiwis regard the winning of the Bledisloe Cup as second only to retaining the William Webb Ellis trophy. A trophy named after that scallywag, Billy Ellis, who in 1823 made a strategic decision to pick up the ball in a game of soccer and score a try.

It was rugby’s greatest ever tactical decision.

Hansen’s quest to win the Bledisloe and Australia’s desperation to survive meant that last week in Perth both teams put all their intellectual property on display. There were some fascinating strategies to decipher.

Firstly, the level of technique and physicality the New Zealanders brought to the tackle contest was above ferocious. The men in black grappled, wrestled, fought and counter-rucked with brilliant technique at every ruck. They made the Australians fight with real intensity for their own ball all match. It was a masterclass in the dark arts of the breakdown.

This tactic had two goals. Firstly, they were hoping the Australians would have to commit more men into the ruck. And secondly, they wanted to buy time for their rushing defence to set and trap the Wallabies behind the gainline. Previously the Kiwis were selective about which ruck to contest. In Perth they contested every single one.

It was great thinking, but it failed because the Wallabies responded with tireless aggression. They cleared out the black jerseys with a consistent tenacity and accuracy that I have not witnessed since the great Australian teams of last century.

They then reverted to what Australian rugby always does when it wins. They dug into their ‘swag’ and went back to their traditional game of playing gainline attack.

Counter-intuitively, against a rushing defence, the Wallaby forwards put their skills under great pressure and ran at pace, receiving the ball flat and close to the defenders.

Nick White, the newly reinstated Wallaby scrumhalf, started to ‘scoot’. That is, he ran a few steps towards the close New Zealand defenders, exactly as George Gregan did 25 years ago. He threatened the first three Kiwi defenders.

This is the counter-intuitive genius of gainline theory. With the ball in hand, get in the face of the defenders by running straight, taking the ball flat and looking to pass. Gainline theory attack slows a rushing defence. Easy to say, but very hard to do.

Developed by the 1927 Waratahs, gainline theory remains crucially relevant in attack to this day. These 90-year-old tactics slowed the rushing New Zealand defence.

When the ball was passed behind the flat running Australian forwards, to Christian Lealiifano at outhalf, he had several options. He could pass to another set of flat, hard-running forwards or go behind them to a deeper Kurtley Beale at fullback or James O’Connor at outside centre. This attacking system has three playmakers. Aided by excellent angled runs from decoy runners, the Wallabies worked around the New Zealand defence several times.

Now, I can hear you say: “New Zealand were a man down for 40 minutes.”

True. But when the Kiwis had 15 on the field in the first half, the statistics show that Australia’s tactics worked beyond the Wallabies’ wildest hopes.

In the first 40 minutes, Australia dominated territory 87 per cent to 13 per cent and possession 81 per cent to 19 per cent. Those numbers are truly incredible. We can say very little about the New Zealand attack because they had so little ball. The first-half tactics were the foundation for the record score against New Zealand.

New Zealand fought like the world champions we know they are. They remain the kings of transition. On the rare occasions Australia kicked, they counterattacked like no other team can. There is another crucial reason the possession stats are so heavily weighted towards Australia.

The Wallaby plan was to hold possession and not kick and thereby nullify the greatest counterattacking system on earth. It’s all well and good to write a plan like this, but it required a massive commitment from the men in gold to find the mental grit to hold on to the ball against a New Zealand team who intended to contest every ruck.

Last week’s performance by the Wallabies proves that New Zealand are vulnerable. It also provides the wonderful statistic that in their last three games against teams ranked in the top 10, the Kiwis have lost two and drawn one. New Zealand have not won against Ireland, South Africa or Australia.

This New Zealand side remains exceptionally good but not unbeatable. For the rest of the world, there is hope that their eight-year grasp on the William Webb Ellis trophy can be ended.

Now, if the Wallabies can win, at a wet Eden Park, for only the third time since the second world war . . .

Apologies. I may have gotten got carried away.