Siya Kolisi returns for Springboks in a bid to prove fitness 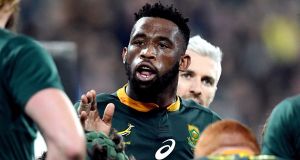 Siya Kolisi returns for the Springboks as he bids to prove his fitness ahead of the Rugby World Cup. Photograph: Ross Setford/Reuters

Siya Kolisi will start as flanker for South Africa in their one-off test against Argentina at Loftus Versfeld on Saturday, eager to prove his fitness ahead of the Rugby World Cup in Japan next month.

Springbok coach Rassie Erasmus named an entirely new selection for the match in Pretoria, the penultimate fixture for the side before they open their World Cup campaign against New Zealand in Yokohama on September 21st.

Regular skipper Kolisi, who missed the whole of the Boks’ victorious Rugby Championship campaign with a knee injury, is not expected to play the full 80 minutes and so the side will be captained by veteran hooker Schalk Brits.

“I’ve asked Siya to empty his tank and go as hard for as long as he can,” Erasmus said.

“I’ve told him he might even come off in the first half. He has played less than 50 minutes of Currie Cup rugby in the last 12 weeks but I needed him to have a taste of Test rugby again before we leave for Japan.”

Brits, one of a number of players vying for a place in the Boks’ 31-man World Cup squad that will be announced on August 26th, will make his first international start in 11 years and at the age of 38 will become the oldest first time captain of the side.

Erasmus has challenged a number of players to push for a place in the squad.

“No matter what has happened before this weekend, the momentum we will go to the World Cup with will depend on what happens on Saturday,” Erasmus said.

“Some of these players will know they are on the plane but for others it is make or break - and even if they don?t make the plane there will be six standby roles to be identified.

“We’ve picked a formidable pack and we saw what the backline did against Australia so I am really excited to see what they can do on Saturday to prove their own case and also show just how strong South African rugby is.”

Uncapped hooker Scarra Ntubeni and prop Wilco Louw will start on the bench, while Cobus Reinach has been given a first test start since 2014 in the scrumhalf berth.