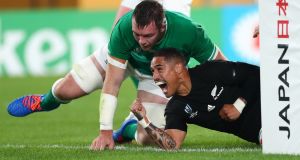 New Zealand’s Aaron Smith celebrates his first try against Ireland. England have to stop Smith, the heartbeat of the team, from settling into that laser-gun passing and pinpoint up-and-under rhythm of his. Photograph: Stu Forster/Getty Images

Kick-off: 9am Irish time, Saturday. Venue: International Stadium, Yokohama. How to follow: The Irish Times liveblog will begin at 8.30am. On TV: Live on Eir Sport, RTÉ2 and ITV.

Maybe it’s simply the all black, all white nature of it, but there are no grey areas about a New Zealand-England game, all the more so as this one has that rare commodity in elite Test rugby; it has something bordering on novelty value.

After meeting four times in 2014, this is only their second clash since then. It’s also merely the third time the three-time and one-time champions have met at a World Cup, the most famous being Jonah Lomu’s rampaging, four-try performance in the 45-29 win at the same stage in Newlands in 1995.

Furthermore, at face value, it could have made a great final. Either South Africa or Wales will have something to say about that on Saturday week, but whoever wins this first semi-final will undoubtedly be favourites a week later, not least as they’ll have a seven-day turnaround whereas Sunday’s winners will have a day less.

Back in August, England looked in ominously good shape, although their campaign here has been more of a slow burner. Meantime, there remained question marks about the All Blacks’ remodelled team then, but they put both the Springboks and Ireland back in their box.

They arrive at this juncture unbeaten in 18 actual World Cup matches in a row, and last weekend shredded Ireland with a near perfect brand of the most bewitching and high-tempo brand of attacking rugby.

So two things can happen. If England are unable to slow down the All Blacks rapid-fire recycling, or fail to push up and make offensive hits beyond the gain line, then they won’t live with these All Blacks. But if they can, England could make this a mighty collision.

Indeed collisions, as ever, seem like the starting point, and specifically England’s ability to stem the All Blacks attack. They will be tested like never before. Somehow they have to stop Aaron Smith, the heartbeat of the team, from settling into that laser-gun passing and pinpoint up-and-under rhythm of his.

The All Blacks play a lot off ‘10’, be that Richie Mo’unga or Beauden Barrett, and in Kieran Read they effectively have a third playmaker. Read has reinvented himself in a manner akin to Cristiano Ronaldo, who began life by using his pace and dribbling on the flanks to devastating effect before, in recent years, confining his work to the middle of the pitch as a goalscorer.

Read is no long galloping up the tramlines as of yore, but instead now plays through the middle. In defence, he pushes up and makes impact tackles. In attack, he takes the ball flat and trucks it up or flicks the ball either way just before contact for invariably well-timed runs from behind. From the recycle, they can go to Mo’Unga or Barrett either way.

As they showed against Ireland with their strike play off a scrum to outflank the blitz, they also have the moves to vary it up and go wide immediately. This remodelled, slightly reinvented All Blacks have almost made the pitch look bigger. It will be fascinating to see if Maro Itoje, the Kamikaze twins Tom Curry and Sam Underhill (both immense against the Wallabies) can stop Read and co at source.

It has the feel of a true epic about it. The All Blacks may have to roll with the punches every bit as much as when the Springboks threw their physicality at them on the opening Saturday six long weeks ago. England may well have a little more about them than the Boks, and especially in attack.

In Mako and the so far relatively muted Billy Vunipola, as well as Manu Tuilagi, England have the ball-carrying ballast that Ireland lacked to take it to the All Blacks’ excellent defence on the gain line.

In restoring George Ford and shifting Owen Farrell to ‘12’, Eddie Jones has also opted to revert to a version of the dual playmaker policy as well. As well as options both sides of the scrum or in tandem, this is a signal of intent that England will put width on their game as the Lions did in the second Test in Wellington to such dramatic effect.

As well as having a similar cutting edge out wide, the Ford-Farrell combination will also enhance England’s varied kicking game out of hand. But even when England are banging on the door, the All Blacks also have that unparalleled ability to jolt into life when transitioning from defence to attack.

“These are the moments that players and coaches and staff want to be involved with,” said Steve Hansen yesterday.

“Let’s hope the game can live up to the hype that will come with it because if it does, we will be sending a message around the world to rugby lovers and people seeing it for the first time ‘wow, what a wonderful game’. There’s an important side outcome about who will win it, but it won’t define the All Blacks and I’m sure it won’t define England either.”

But, allowing for a dreaded third/fourth place play-off, it will end one team’s hopes of winning this World Cup.

It could well be that England strike sufficient blows to put scoreboard pressure on New Zealand long into the match. They could even be ahead when it’s all over. But now that the World Cup shackles have been removed by the win of 2011, and further still by the retention of the trophy four years ago, mentally the All Blacks seem like a team not remotely inclined to panic.

They appear secure in the belief that they can keep regrouping, make the decisions that need to be made and, despite what Jones has been suggesting from the start of the week, execute under pressure better than anybody.

Forecast: All Blacks to win.