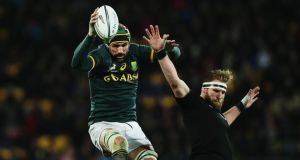 Victor Matfield on Paul O’Connell: “”You can see he puts in a lot of hours in analysing, preparing and getting his whole unit ready for the weekend. So it is always tough going up against him.” Photograph: Hannah Peters/Getty Images

The importance of the lineout as a starter point in attack and also a key area when it comes to defence was at the nub of a question directed to South Africa’s Victor Matfield ahead of Saturday’s test match against Ireland at the Aviva stadium.

The 37-year-old Springbok secondrow retired after the 2011 World Cup but the South African coach Heyneke Meyer, who took over from Peter de Villiers in 2012, eventually persuaded Matfield to return to the international fold almost two years after first approaching him.

The player was energised by the prospect of signing off at the 2015 World Cup in England and signed a two year contract with the Bulls that will take in 2014 and 2015, while also doubling up as the Super 15 side’s attack coach.

His return to the Springbok colours is a massive coup. Back as a vice captain to Jean de Villiers, he has also resumed his role as the team’s lineout guru, a state of affairs that will bring him into conflict with a familiar foe, Paul O’Connell against whom he’s enjoyed so many battles during the five matches in which Matfield has played against Ireland.

He articulated that respect. “I think he (Paul O’Connell) is a fantastic player. I have said it before, I think he’s probably the best player that I have played against in my career. He is also a student of the lineout.

“You can see he puts in a lot of hours in analysing, preparing and getting his whole unit ready for the weekend. So it is always tough going up against him.

“I also think when Gert Smal (former Ireland forwards’ coach) was here he gave a lot of insight into how I think about the lineout to Paul, so it makes it more difficult.

“It is always a great battle against him and he (Paul) has some great jumpers with him in that unit so we know it is going to be very tough. Like I said, we know we have to be accurate in what we do because they will definitely put pressure on us.”

Matfield also acknowledged that a spin-off of the lineout, the rolling maul, also promises to be a keenly fought area of the match. He explained: “The rolling maul is very important to us. Looking at them (Ireland) as well, they were very successful in sacking the maul during the Six Nations, especially.

“They stopped it very well. We know we need to do our things right and hopefully the referee (France’s Romain Poite) will be very strict on how to stop the maul. If we do our things right it is a lot easier for the ref to see if they (the opposition) are stopping the maul legally or not. It’s important for us to get our set-up right, to get it started and from then it is easier.”