Liam Toland: Ireland smile returns but it needs to be wider against the All Blacks 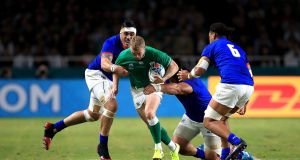 Should we Irish continue to subject ourselves to one-out jamming a million times a match as limbs are crushed and torn. Should we continue to ignore wonderful assets out on the wings or, indeed, should we not have more ambition in how our backrow contribute when all the ball?

To answer, I wonder where you were on Sunday morning? Were you witnessing how rugby can and should be played; not by the All Blacks but by the rest of the world as represented by the Japanese in a display that was so close to perfect total rugby that Johan Cruyff himself could but admire.

Thankfully, world rugby caters for all shapes, sizes and game plans and for the first time this tournament we saw an Irish game plan executed with a bonus. When is a red card a bonus? When it’s produced after a half an hour as Ireland are 21 points up to a hapless Samoa. Only then did the Irish players have to stand up, think, adjust, take charge and power on.

Joe Schmidt was high in the stands and although messages would come on, the players would have to at least get to half-time before the boss could redirect where necessary. The question was; could they or would they?

The answer is yes and no. So much of the opening went perfectly to plan; that opening penalty kick to touch by Johnny Sexton which stole every possible inch off the pitch before an Irish lineout maul, whose variant I hadn’t seen before, tricked Samoan forwards before slipping in around the front without a glove being placed. Brilliant, but all too easy and not game management ideal for this coming weekend.

During this period of dominance certain Ireland players stepped up. Sexton obviously, but Jordan Larmour too, where his style of running, shifting forward, challenging weak shoulders, placing doubt in defenders was most akin to Japan’s style yesterday.

Take Sexton’s try, Ireland’s third. What Larmour did looked easy but don’t underestimate what he actually did. He required a huge hunger to dominate the tackle, find a weak shoulder, place the fend and then, and only then, hunt for the offload. Looks simple, but Irish players are not doing this regularly, or at least regularly enough to create the sea change required for support runners to flourish. So after 21 points and 21 minutes Ireland didn’t require any real game management as all that was planned, went to plan.

On a rare Samoan break out Robbie Henshaw, who understandably struggled throughout the fixture, timed a breakdown steal poorly and Ireland were penalised. This is an infuriating outcome for Samoa, whose entire breakout had Ireland in terrible shape, but for some reason Henshaw escaped the yellow card. Samoa went down the line and scored off the subsequent lineout. A good outcome but arguably they deserved to play against 14 Irish players for 10 minutes.

Either way along came the red card and with it Ireland’s first game management challenge. So how did they cope? It’s hard to articulate in that Ireland went on to win, score another four tries and enjoy some excellent individual performances.

But it was lovely to see CJ Stander having won a breakdown steel on 52 minutes, stand up, smile and wink and moments later to see Cian Healy and Niall Scannell smiling to each other. Seven tries and happiness makes for an extremely positive week ahead for the squad where some of the work-ons look so daunting that smiles are hardly going to get us there. That said it would be impossible if they weren’t there.

Tactically there were some adventurous plays; lovely off the top lineout hands from Tadhg Beirne or some subtle tip-ons from Iain Henderson to Beirne or Stander to Tadhg Furlong, but in the period between 50 minutes and 60 minutes Ireland really narrowed and totally ignored the assets out wide.

Yes, Ireland were down a back but at the hour mark Samoa had made five times the tackles of their opponents and were ripe for plunder had Ireland showed ambition. Yes Joey Carberry’s push-through kick was pure quality for Andrew Conway but neither Keith Earls nor Jacob Stockdale have scored a try in the tournament, which is an institutional failure. And the closing scrums are a concern but everyone’s smiling again which is success.

A word on the ever evolving tackle area: red card, yellow card, penalty or nothing at all. Mitigating circumstances is certainly one element but what was Samoan hooker Seilala Lam to have done when Stockdale led with his lip into the tackle?

Lam set up in the perfect tackle technique, like an Olympic dead lifter, low hips, low shoulders and on the toes, but Stockdale was hit and a yellow card followed. Bundee Aki hit high too with less mitigating circumstances and off he went.

On Sunday, Scotland’s Jonny Gray smashed into Japan’s hooker Shota Horie with referee Ben O’Keeffe happy that it was an unfortunate clash of heads. I’ve some sympathy for this but Horie was not jamming around the edge of a ruck but standing prone in open field. There’s buckets more examples and in essence I’m confused. By the way Horie didn’t receive HIA treatment, which is even more worrying as blood streamed from his head.

PS: No doubt Japan are totally exhausted from their wonderful Scottish victory and are vulnerable to an extremely fresh South Africa, and I suppose the Samoan Manu Siva Tau war dance is good preparation for the All Black Haka!

1 The Offload: Ireland are stuck in no man’s land
2 Nicky English: Galway and Waterford face battles with fatigue in All-Ireland semis
3 Davy Russell on neck injury: ‘it was a very close one and I dodged a bullet’
4 Every kind of wind imaginable was against Tipperary football - and they came through
5 Crowds of 4,000 to return to sporting events in England from next week
Real news has value SUBSCRIBE