Liam Toland: Robbie Henshaw might just give Ireland a sense of direction

Ireland need Henshaw at his communicative best, especially when Sexton leaves the field 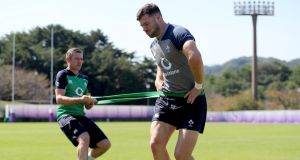 Maybe Donald Tusk was referring to all things Irish when tweeting “quo vadis?” this week. Hardly a reference to Ireland’s journey in RWC 2019, but I do feel we are marching on and am temporarily upbeat as I recall Robbie Henshaw’s first touch in a blue jersey of Leinster after a prolonged injury spell.

He hadn’t played since the Round 6 game away to Montpellier in January 2018 and yet, when it came to facing the Scarlets in the April 21st, 2018 semi-final of the Champions Cup in the Aviva Stadium, he was massive. Regardless of the rustiness, he set a tone that impacted not just on the players but on all those in the stadium who were dubious.

It was off first-phase play deep in attack and was not unlike the line and perfect timing from Japanese centre Ryoto Nakamura in setting up Japan’s match-winning try. Henshaw is that type of player and boy, do we need him to give our team the direction, energy and focus we’ve been lacking. Many believe he can play 12, 13 and 15 but I feel inside centre (12) is his place.

But it is not just his playing style but also his communication. Communication is a valued commodity but what does it really mean? I’ve never shared a pitch with these players but Bundee Aki strikes me as a get-on-with-it type of player, ie he instinctively plays what he sees.

Rugby is, however, about building layers that lead to an outcome. Joe Schmidt has a very obvious gameplan – set piece and rucks requiring 90 per cent-plus success rate, leading to a mismatch outcome or pressure penalty concession. However, take for example when an opposition such as Wales have the habit of firing their scrumhalf out of the defensive line to hunt for the man and ball hit, closing down a less-skilled back line who struggle to get outside this ploy.

By the way, it is infuriating how often Gareth Davies was allowed by Jérôme Garcès against Fiji to fire off the line, many times too early, but with the freedom to correct and retreat without punishment. This style is well flagged and the Irish midfield will be aware and influencing the layers to expose it. They do so by engaging their rugby brain and feeding this into the outhalf. This has been lacking over recent weeks.

The above Davies example is an obvious one that will be prepared for but, in the ever-evolving environment of Test rugby, Ireland need Henshaw at his communicative best, especially when Johnny Sexton departs the field.

And that is particularly so with the less obvious scenarios that evolve in real time. Take the Schmidt game-plan that requires gainline and set piece dominance. What if that malfunctions or simply doesn’t get the ideal outcome? What then? Who is noticing these oftentimes subtle messages?

Take Iain Henderson. Big games are needed across the board but Henderson has suffered most in recent weeks. He looked exhausted against Japan, which impacted his influence that dropped immensely from the towering performance against the Scots. It didn’t improve against Russia, and Ireland need him flying onto the ball, sucking in multiple Samoan defenders in order to create quick recycle and mismatches as the layers are being built.

He was marvellous against Scotland, so all was going to plan. Good communicators recognise when the plan is not working and adjust to accommodate same. Jonny Wilkinson, one of the greatest outhalves of all time, had a serious rugby brain in Will Greenwood outside him for the duration. There is a huge difference between an instinctive player like Aki or iconic leader like Peter O’Mahony and a rugby brain that feeds real, live, credible, tactical information into the outhalf.

Ireland currently have a real problem in this department. There is evidence that the outside backs may be talking but are not in fact communicating. Rambling on about various events is not communicating. Maybe it’s best framed as the difference between information and intelligence. The latter is what Greenwood did – interpreted information – and that has huge value. There also must be a willingness to listen and here may be an Achilles’ heel in Sexton. Does he trust the intelligence being delivered? For this reason I would prefer Henshaw at 12 and Garry Ringrose at 13.

Why not start Josh van der Flier at seven because he is by far the best seven in the squad?

With Saturday’s selection in mind I feel tighthead John Ryan is hugely undervalued. And my quarter-final backrow is now Rhys Ruddock at six, O’Mahony at seven and CJ Stander at eight, although a fit Jordi Murphy could be well suited to the number eight jersey for his footballing skills alongside Ruddock and O’Mahony.

Why not start Josh van der Flier at seven because he is by far the best seven in the squad? I fear that Ireland will be going backwards a lot in the quarter-final and need players to stop the flow. I’ve watched nearly every match this RWC and conclude that South Africa are equally as frustrating as Ireland.

Coincidentally, their playing styles are, well, similar, which fills me with hope that should we meet them we have more than a fair chance to beat them. Their game plan does not maximise/reward their physical dominance as, having built the physical layers, their outside backs’ skillset struggles to unlock chances for the player of the tournament – their right winger Cheslin Kolbe.

But to get South Africa and avoid New Zealand, first we need to avoid the farce that is a potential 0-0 draw (if Japan v Scotland is cancelled) this weekend. Referee inconsistency has irked me hugely but to see Scotland potentially out of the tournament and us forced to play the All Blacks due to the weather is outrageous. A rugby pitch is 100m x 70m; can none be found in a country the size of California to ensure the fixture? Quo vadis?