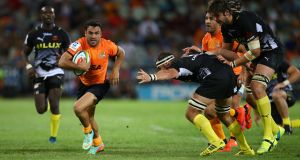 There’s one major lesson I learned as the scores rolled in last weekend. Political parties are no different from a myriad of sporting organisations. If the leader does not perform, then quality people down the chain lose out. In politics, TDs don’t get returned, in sport, organisations can crumble (Fifa?) or players get injured and/or performance dip impacting selection.

With this swirling in my head I look back over the current Six Nations to RWC 2015 and wonder. What would have happened in the RWC quarter-final between Ireland and Argentina had the Pumas been accepted into the Northern Hemisphere and not the southern Rugby Championship? Would Argentina have opened us up in a way England were unable to do?

Would Argentina have scored four tries with power and pace using the full width of the pitch? Or would we have both battled bravely in a slug fest with a controversial refereeing decision deciding the contest?

Newly-formed Argentine franchise Jaguares playing Super Rugby against the Cheetahs in Bloemfontein last weekend allowed me to benchmark. The Jaguares, miles from home, in their first ever Super Rugby match were 24-3 down at half-time having had two players in the sin bin.

I beg you to watch the performance. Argentina’s hooker Agustin Creevy was at the heart of our defeat in RWC and was at it again for Jaguares. At 24-3 Jaguares had an attacking lineout which they mauled with Creevy at the tail. Why are Ireland not lineout mauling? He peeled off and produced an outrageous inside step to bamboozle Cheetahs’ outhalf Fred Zeilinga before pulling his backdoor offload to his scrumhalf Martin Landajo for a try. Sean Cronin is this type of player.

Their next score came from yet another attacking lineout which they mauled. This time Creevy ignored the offload and barged directly over for a try. Their third try came from a crossfield kick, catch and offload. With the exception of Creevy’s sidestep and offload, Irish players can copy. However their fourth try was different. Emiliano Boffelli countered from his 22. Why? Well they needed a try and the Cheetahs had a poor chasing line. But counterattack is part of their culture and as Boffelli read the situation so too did his team-mates.

Boffelli didn’t panic when brought down knowing that his team-mates were reacting accordingly. Matias Orlando gratefully took the offload just outside their own 22. Off he went, full of energy (akin to Luke Fitzgerald). He broke five mostly poor tackles before giving a backdoor offload to Landajo on the Cheetahs’ 22 and they scored under the posts.

To ensure the win Nicolas Sanchez sat in the pocket and dropped a drop goal. My point? There’s nothing we can’t do as described above but we aren’t picking the best broken field players with license and real pace for that outcome – Sean Cronin, Simon Zebo, Craig Gilroy, Guinness Pro 12 try machine Matt Healy et al. Acknowledging that international rugby has far more challenging hurdles than the Cheetahs, there are still only minor adjustments required from Ireland to start scoring tries; two from three matches thus far is hardly ‘scoring tries’.

Benchmarking the total stats between our fixture in Twickenham and Bloemfontein is instructive. The penalty count was exactly 22 each. Twickenham impressively out-passed Bloemfontein by 65 passes with defence in Twickenham making more tackles with less misses. But that doesn’t make us better defenders or them looser players per se as it indicates the vast majority of Six Nations point of contact in attack is easier to defend.

This is understood when linking attack stats where Twickenham struggled. Bloemfontein outran Twickenham by 30 per cent, beating defenders 74 per cent more than Twickenham, with clear breaks 172 per cent and offloaded by 440 per cent.

There are more rucks in Twickenham but the southern game had more turnovers conceded. I enjoyed both games immensely but they are different games; eight tries in Bloemfontein to three in Twickenham. Ireland need tries.

Even taking into account the injuries to Sean O’Brien, Peter O’Mahony and especially Iain Henderson and backs such as Luke Fitzgerald, short-term Six Nation advances can occur through team selection and subtle tactical changes around our set piece and ambition to counter- attack when it’s on.

Back to leadership. Real leadership in the school/youth injuries must come from the top down, even skipping the middle. For instance I wonder did the president of the IRFU visit the Gonzaga College injured kid after the recent debacle between doctor and referee. This action would be a big statement that Irish rugby is serious.

In essence we can improve both injuries and skills by recognising there is a dearth of knowledge in the formative levels of our game that potentially exposes players to injury whilst paradoxically not maximising underage skills. The competitive structures are not fit for either purpose.

Change the competition rules to promote skills, such as lower the tackle point which will encourage offloads, realign players’ weight over age and wingers get six points for a try! Invest in the growth of the game by really understanding that many parents have no real idea how to; coach and encourage skills and crucially coach the finer parts of the game; such as quality counterattack and the safe tackle! liamtoland@yahoo.com