Rugby Statistics: Captain on verge of place among the Best 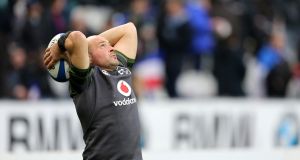 If Ireland go on to complete the job this season, an umbilical link between the most successful captains in the history of Irish rugby and the Six Nations Grand Slam will be further strengthened when it comes to discerning a pecking order of success.

The parameters employed in deciding an order of merit for Ireland’s statistically most successful captains include the stipulation that the players must have led their country on 10 or more occasions. There is a weighting of half a point in terms of the overall percentage for matches drawn.

Honourable mentions must go to Rhys Ruddock (4), Peter O’Mahony (3), Anthony Foley (3), Reggie Corrigan (2) and Nick Popplewell (2) all of whom boast a 100 per cent success-rate when leading Ireland while there are a handful of others, including most recently Eoin Reddan and Seán O’Brien who are unbeaten in a one-off capacity.

Leading the way is Ireland’s 1948 Grand Slam-winning captain Dr Karl Mullen, who lost just three matches in his 15-game tenure, his team also securing a couple of Triple Crowns and Championships over a three-year period.

He won the first of 25 caps against France in 1947 and didn’t take over the captaincy until the second match of the Grand Slam season as scrumhalf Ernie Strathdee led the national team against the French in Paris.

Educated at Belvedere College he was a fellow of the Royal College of Obstetricians and Gynaecologists and worked in Dublin’s Mount Carmel Hospital for more than 40 years. He led the Lions to New Zealand and Australia in 1950 playing 17 matches including two Tests against the All Blacks – he was injured for the other two – and inspiring his side to a 2-0 series win against the Wallabies.

Mullen’s closest pursuer is William Earnest ‘Ernie’ Crawford, born in November 1891 in Belfast, he played for Malone but after moving to Dublin – he married a local girl – he lined out for the Lansdowne club, whom he captained from 1921-1923.

Crawford fought in the first World War, enlisting in the 6th (Inniskilling) Dragoons Service Squadron initially and on action service was injured, the extent of which was a wound to the wrist, “resulting in one arm being shorter, and having no power in three fingers”.

It didn’t prevent him from going on to have a brilliant rugby career, capped 30-times between 1920 and 1927 at fullback – he made his debut at 28 years of age – and leading Ireland on 15 occasions, including 10 victories, the same figure as Mullen, from an identical number of matches as captain.

He also managed to line out for Bohemians soccer club – he had previously played for Cliftonville when growing up in Belfast – and although not a first-team regular because of his rugby commitments was one of six players from the club chosen for an extended panel to represent Ireland at the 1924 Olympic football tournament.

When the squad was whittled down he didn’t make the 16-man squad, although he travelled to France as a reserve and was stopped at customs for carrying a revolver which he explained he was carrying “for his peace of mind”.

He is celebrated in Bohemians folklore – there was a banner at a Bohs match last season that proclaimed, ‘Ernie Crawford, He’s our friend, He hates Rovers’ – for removing his shirt and offering to fight Shamrock Rovers star Bob Fullam in the middle of the pitch after a particularly feisty encounter.

Crawford, one of the outstanding rugby players of his generation, was honoured by the French government for his services to sport and also appears on a Tongan stamp.

Tom Kiernan, UCC, Cork Constitution, Munster, Ireland and the Lions, enjoyed a 13-year career in international rugby scoring 158 points in 54 caps for Ireland, touring twice with the Lions; captain in 1968, playing in all four Tests (35 points).

He kicked two penalties in Ireland’s 9-6 win over South Africa in 1965, the country’s first victory over the Springboks and led Ireland to a 10-10 draw with New Zealand at Lansdowne Road in 1973. Kiernan coached Munster to their famous 12-0 victory over the All Blacks in 1978 and went on to be a skilled and respected administrator in Irish rugby: a founding father along with Welshman Vernon Pugh of the Heineken Cup.

O’Driscoll’s feat of leading Ireland 83-times may never be matched and a winning percentage of 63.25 is an excellent achievement. However, it’s a figure Best will surpass and in the process move into third place on the list if this season’s Grand Slam dream is realised.