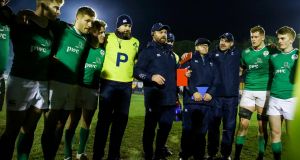 Ireland coach Nigel Carolan talks to his players after their win over Italy. Photograph: Inpho

Ireland Under-20 coach Nigel Carolan has made several changes to the side that beat Italy for Friday night’s Six Nations meeting with France at Donnybrook on Friday night (8pm, live on RTE 2).

Ulster’s Rob Lyttle, who has played at senior level for the province, will make his debut at fullback, Tommy O’Brien will start at outside centre, and Bill Johnston returns for his first game with the underage national side since damaging a shoulder in last year’s World Cup campaign.

Jack Kelly (shoulder), Gavin Mullin (hamstring) and Johnny McPhillips (groin) are injured while Trinity’s Colm Hogan is slightly unlucky to miss out after playing in the victories against Scotland and Italy. Jack Regan is named in the secondrow in the absence of Fineen Wycherley – the latter required by Munster – with Marcus Rea replaced the injured Cillian Gallagher (shoulder) in the backrow.

Calvin Nash becomes the third Irish captain of the campaign. Peter Cooper is fit again after missing the last game and is joined by a couple of several new faces on the bench in Ronan Kelleher (brother of Cian), Sean Masterson (brother of Eoin) and Alex McHenry, a son of former European Tour professional golfer, John.