Ahead of his 100th cap, the Irish players pay tribute to their captain Paul O'Connell as they train ahead of the Six Nations clash against Wales. 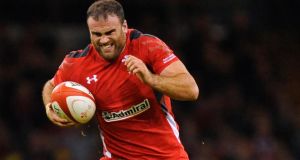 Jamie Roberts: is a different player in the Wales jersey – despite his less than spectacular sojourn wit Racing Metro. Photograph: Colm O’Neill/Inpho

Wales don’t scare us like France and England can. Still, we have to respect what they have achieved under Warren Gatland. Three Six Nations titles, including two Grand Slams, since 2008 is remarkable in modern day rugby.

And they should have reached the 2011 World Cup final.

But they have never really worried us, probably because we tangle and overcome them so regularly in the Pro 12 (last weekend’s clean sweep excluded!).

Granted, the Welsh man is a totally different animal playing for his country than his regional side. They always have been. Collectively, in the red jersey, they become more alpha than beta males as soon as Hen Wlad Fy Nhadau is belted out. Especially in Cardiff.

But we are seeing something similar with Joe Schmidt’s Ireland. The provinces are not as strong as they once were. Munster and Ulster struggled in Europe this season, unable to escape horrendously tough pools, while Leinster were lucky to get a home quarter-final in the Champions Cup.

In contrast, Ireland have won ten on the trot entering this weekend with only three defeats during Schmidt’s 16-match reign.

It’s been a healthy change to the dynamic of Irish rugby in some ways. I’m sure the provinces will rise again but the old worry that those arriving from provincial rugby were overly partisan doesn’t exist anymore. Arriving into national camp has almost been a form of escapism.

Certainly, the players seem to have embraced the clarity and work ethic demanded of them. Not that this doesn’t happen at provincial level, it’s just a different and currently ultra-positive environment.

This is not a negative view of the provinces – they will evolve and figure out their changing landscape – but imagine men like Rory Best or Peter O’Mahony switching into Ireland mode after pummellings suffered against Toulon, Saracens and Clermont Auvergne.

Such defeats would have scarred these provincial captains. All that hurt disappears, or can at least be harnessed correctly, on the winding drive into Carton House because they know they are joining a better team, where heavy beatings are memories from the distant past.

That has rarely, if ever, been the case before. But it’s true. Ireland are now better in an international context than Ulster, Munster or even Leinster are in Europe.

Sam Warburton becomes a better openside when joined in the backrow by Toby Faletau and Dan Lydiate. Same goes for O’Mahony alongside Seán O’Brien and Jamie Heaslip. Or whoever else. The point is the collective makes them superior to what they leave behind.

The evidence is everywhere. Jamie Roberts has hardly lit up the Top 14 during his sojourn at Racing Metro 92. But we know he’s the best 12 in Europe because of his Welsh exploits.

Against England Robbie Henshaw reached a level of performance none of us expected from him for a few more years but who doesn’t play well outside the Johnny Sexton and Conor Murray halfback combination?

Or in front of them for that matter.

The Munster side of 2008 or Leinster from 2009–2012 had few weaknesses. Considering the quality of their foreign recruits, they would have overcome most international sides. That’s changed now, and changed for the good in a national sense as less foreigners in the system means more players, like Marty Moore and Jack McGrath, are coming through quicker to play Test rugby.

When they move up to Ireland they are linking up with a better, stronger squad. They are entering an environment where there is incredible competition for places. Just look how the Lions threequarters Luke Fitzgerald and Keith Earls are unable to make the match day squad. Sure Gordon D’Arcy was dropped from the training panel this week as Darren Cave’s Ulster form was rewarded.

With Ireland under Schmidt, like Wales under Gatland, all the pieces make up a championship-winning machine.These machines collide at the Millennium stadium on Saturday.

Another change in psyche is the way Ireland carry the mantle of favourites. You hear it after victories, when they find fault with their performance – especially the forwards after beating the Springboks. There was Paul O’Connell and Simon Easterby, despite putting a Victor Matfield pack to the sword, being genuinely disappointed with the scrum.

But they are working out the kinks – the scrum has shown dramatic improvement against Italy, France and, most encouragingly, how they held the English at bay.

But our ingrained Irish pessimism is hard to shake. Maybe we should embrace our current status in world rugby but the nerves won’t allow it. Wales don’t scare us but Grand Slam thoughts creep into the mind.

That was always going to happen after beating France and England. Who could blame us?

Wales though must be respected. They will raise their performance, even from that impressive second half in Paris, so it’s imperative that Ireland dominate up front, like the England did in Cardiff.

Wales will seek to take Ireland through the phases, seek to punch holes in midfield with the Lions combination of Jamie Roberts and Jonathan Davies providing a huge examination of Henshaw and Jared Payne. They also have an X-factor, world class element in George North.

But very simply, it’s the 2013 champions against the holders at the best rugby stadium in the Northern Hemisphere.

As we have only scored three tries, anything short of victory and hopes of retaining the trophy will fade. Ireland have the best points difference (40) but that will be radically different if Wales prevail.

There’s one other element to be considered. Being the ultimate team man, Paul O’Connell won’t like any build up around his 100th cap but it cannot be ignored. Quite simply, he’s been Ireland’s best forward since Keith Wood retired in 2003. That’s 12 arduous years when, for better or worse, he was at the forefront of every Irish battle with the heavyweight nations.

The ultimate team man, I’ve shared a changing room with him after one of those astonishing 80 minute performances when Munster or Ireland have lost. He would be sitting there, devastated. Individual milestones, like Saturday, were always irrelevant if his team were beaten.

If even one from O’Mahony, Heaslip, Best or O’Brien can outplay him Saturday Ireland should be fine. It’s phenomenal to think his standards in a green jersey have never dipped in 100 games over 14 years.

I’ve always seen him as a more controlled version of Roy Keane. Same domineering way, always seeking to improve and so ferocious when the moment demands it. And he’s popular! That’s not because he is a great rugby player, it’s because he is a good lad and a great team-mate.

I just hope he can enjoy these last few days in a green jersey. The mentality of someone so driven to succeed tends to block out all the other senses. They don’t stop to enjoy these memorable occasions.

In my last few years as a pro I wasn’t playing as much and couldn’t make the same impact, as I wasn’t the same athlete, but I was able to enjoy the whole thing a bit more. I enjoyed heading off to training, playing the games, especially the big ones.

Time flies by so quickly. Paul is probably scratching his head wondering where it all went. I loved that moment at the Aviva Stadium when, after beating England, he took his son Paddy from the stands and they walked down the tunnel together. To be able to do that was incredibly special.

So I hope Paul enjoys the weekend and maybe allows himself a wry smile when soaking up the Millennium Stadium atmosphere. Maybe even go easy on Alun Wyn Jones. Let his Lions locking partner win one.

Only codding. He’ll be as brutal as ever. Probably top the tackle count or number of carries. Or both.

Then we can talk about a Grand Slam for real.

1 ‘Manchester United are lucky to have you’: Klopp responds to Donegal schoolboy’s letter
2 Six Nations: Ireland v England all you need to know guide
3 Iain Henderson ruled out of Ireland’s Twickenham visit
4 Liam Toland: Larmour can distract England while others flourish
5 Eddie Jones: back three will deal with Irish aerial threat
Real news has value SUBSCRIBE