Ireland outhalf will begin training fully on Thursday, according to boss Joe Schmidt 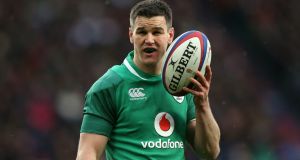 Joe Schmidt has admitted he relishes Eddie Jones’ verbal “grenades” ahead of Ireland launching their Six Nations defence against England.

England boss Jones has already started the mind games by claiming Ireland outhalf Johnny Sexton has the “bat phone to the referee”.

Ireland will begin their Six Nations campaign by hosting England in Dublin on February 2nd, with boss Schmidt insisting he is relaxed about the “banter” between the coaches.

“Eddie walked past me earlier and said ‘let’s get ready for a few grenades’,” said Schmidt. “He told me he was going to keep them coming!

“He’s incredibly hard to read, because you don’t know if he means what he’s saying or if he’s joking.

“I think it keeps it fresh, it keeps it entertaining. It does make me think ‘is he serious about that?’.

“We are training in Portugal at the moment just 15 minutes away from England — and Eddie said he might whip across and have a look. And because that’s topical at the moment, he just throws that into the conversation.

“I enjoy the banter with Eddie. He’s a smart coach.”

Sexton has been battling a knee tendon injury, but Schmidt confirmed the British and Irish Lions fly-half should train fully on Thursday and be at full-tilt to face England.

Jones’ latest claim about Sexton is to insist the Leinster playmaker receives special audience from referees.

The candid Australian coach claimed “when he talks, the referee listens, that is because of his status in the game”.

In November, Jones insisted Sexton receives more protection from referees than England fly-half Owen Farrell, while in 2016 he claimed the Ireland player’s parents should be “worried” about a whiplash injury.

Ireland in the past might have been riled by Jones’ comments, but now Schmidt is adamant he is ready to indulge in the mind games.

Asked about Jones’ “bat phone” comments on Sexton, Schmidt replied: “Yeah, look I want to get hold of it if I can. I’d like a direct dial myself.

“I don’t know that Commissioner Gordon is in the building when matches are being played.

“With Johnny, I’m not sure Owen is that different, or Dan Biggar either. They are demanding of themselves, their co-players and officials.

“Because they are incredibly competitive they will ask questions. They are also really intelligent players. They know the rules of the game.

“Johnny doesn’t have as much to say for us because he’s not skipper. Rory (Best) would be the guy who is more face-to-face conversations than bat phones — but I think he manages that well as captain.”

Schmidt revealed Ulster lock Iain Henderson could be fit for Ireland’s final two matches, against France and Wales, owing to a finger issue.

On Sexton’s return to action, Schmidt added: “Johnny trained yesterday. He will train fully on Thursday when we try to ramp the training up a little bit.

“Our expectation is that he will get through that without any problem at all.

“Iain Henderson could potentially make the last two weekends. Tadhg Beirne should possibly make the third weekend, after his knee issue. I feel bad for both of them.”