McFarland and Ulster know they must improve for Leinster 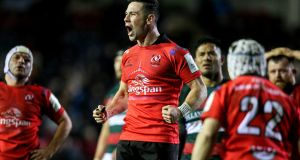 How Dan McFarland will look back at this match; stifling the gag reflex and with unfathomable pride. Ulster created a large sink hole, then climbed out. The fear is their capacity to occasionally go deep. If they travel to Dublin in a similar state of disarray at the end of March, they won’t emerge.

Ulster’s deep canyons and alpine peaks that were on show at Welford Road won’t cut it at the Aviva against the defending champions, with the provincial showdown at least ensuring safe Irish passage for one side to the last four.

But McFarland, if anything, is an optimist and with John Cooney transforming the game at scrumhalf and the derring-do of Iain Henderson storming back from a thumb injury seven weeks before expected with a man of the match performance, there were bright signs.

The scrum creaked and lineout collapsed. Both will need a solid dusting down with Ulster getting picked off three times in attack and once in defensive lineouts to continually deny themselves platforms. McFarland will point out the first try came when Ulster turned to their maul from a lineout, the previously error-prone Marty Moore guiding it and the ball to the Leicester line.

A first time in five years in the knockout phase will also energise the province. The fringe benefits are that Cooney again scrambled into the public eye, his palliative care of the ball reassuring the Ulster revival and Henderson’s belligerent showing a declaration to Joe Schmidt that he is far from a busted flush for this Six Nations Championship.

“Yeah, it was a goal of mine to come back early,” said Henderson. “I genuinely didn’t have a clue that I was coming back and that I would be allowed to play until Tuesday afternoon. I trained fully on Tuesday before I went to see the surgeon; whether or not I should have [trained] is another thing.

“I said to him ‘look, I’m training fully, have good movement in it, strength in it’, and thankfully the surgeon cleared me. He was happy for me to train the rest of the week and give it a rattle, and I’ve had no problems with it.”

Henderson added that he is unsure yet whether he is travelling to Portugal on Monday with the Irish team for warm-weather training. Schmidt is replicating some of the preparation that went into last season’s Grand Slam run and is taking his squad away ahead of the England showdown on February 2nd.

“He has named the squad. The guys who are going to Portugal, we’re not a hundred per cent sure yet,” added the Ulster lock.

“Joe likes to play his cards close to his chest, not just with you in the media but with ourselves as well. I’m ready for whatever Joe wants me to do. If he decides that I need some game time, I’m happy to go out and play at Kingspan next week. If he wants me to put my feet up for a week, then of course I’ll do that too.”

George Ford kicked Leicester ahead before centre Matt Toomua dotted down and Ford, who had chipped Toomua through, converted for a 10-0 lead at half-time. Ford added another penalty just after the break, which triggered Ulster’s response, initially through Moore.

An impertinent kick by Billy Burns over the Leicester defence for Sevens convert Robert Baloucoune to chase then hauled Ulster back, Cooney’s excellent conversion giving a one-point lead with less than 17 minutes remaining.

“Dan [McFarland] has been absolutely fantastic,” said Henderson. “I think he has come in and added direction for a lot of the young lads. I was counting in the changing-room there . . . I think there was maybe six or seven names who are in their first season in an Ulster jersey.

“He’s come in and added real direction, and maybe a few guys who have been there a number of years have maybe been lacking. We haven’t been competing at the top level the way we should be. I think Dan asked a lot of new guys and old guys to step up.

“It’s the old cliche,” he added. “There’s no point in worrying about the quarter-final now. That’ll be shut away for a good few number of weeks before we look at that.”

Another trip away for Ulster, still a work in progress.