Ireland and New Zealand have shared two wins apiece since 2013. That will change on Saturday 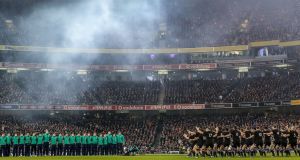 Joe Schmidt’s decade in Ireland has yielded unprecedented success ever since Johnny Sexton orchestrated Leinster’s miracle revival against Northampton in the 2011 European final. It was Sexton’s drop goal at Stade de France, to spark the 2018 Grand Slam, which secured Schmidt’s legacy, but when most happenings from these heady days are forgotten, games against the All Blacks will linger because they represent the evolution of Irish rugby in an incomparable period of time.

There was no warning sign. A fortnight previously the Wallabies had thumped Ireland 32-15 but not a single soul at the Aviva will forget the noise, the Lansdowne roar resurrected on its burial ground, as Rob Kearney, with gritted teeth, pounded his way down the right wing, Kieran Read in hot pursuit. That made it 19-0 after 17 minutes. So began Richie McCaw’s superhuman refusal to be the first All Black captain that loses to Ireland. On 73 minutes, with the score 22-17, Sexton allowed his kicking routine to be disrupted by a child’s voice in the crowd, as the image of his son flickered in his mind’s eye.

“17 (Jack McGrath) straight off your feet,” said Nigel Owens with 79:33 on the clock. McCaw instantly attacked and two minutes later Ryan Crotty’s try levelled it. Cruden, eventually, converted for the win. As joy flipped into misery on this black night, nobody could have known it was the beginning of the best of times.

Joe Schmidt: “Not to get a result that was in our hands is pretty devastating.”

Steve Hansen: “Had they kicked the goal it was all over, but they gave us a sniff.”

All about South Loop on the sunny morning of November 5th, 2016 the Chicago Cubs victory parade organically transformed into a St Patrick’s Day rout. Conor Murray’s magnificence was accentuated by a ferocious tackle on Julian Savea to set up the scrum that led to Robbie Henshaw’s killer try.

“It’s three years, isn’t it, which is scary,” said Murray this week of Anthony Foley’s passing. “And it’s a bit of a reminder of what happened in Chicago. Axel played a massive part in that day, obviously, with the way we approached the Haka . . . he has definitely been in my head this week.”

Ireland scored an astonishing five tries to New Zealand’s four. The fifth being the sweetest.

“We were in such a dominant mindset yet calm,” Jamie Heaslip remembered. “There was a scrum in our half, we went to the edge to draw the winger up and Zeebs knocked it down field as everyone burned up and trapped Julian Savea.”

Miraculously, it was Murray who drove ‘The Bus’ over the dead ball line.

“We knew what we were going to call straight away. We looked at each other and said ‘Princess’ at the same time.”

On New Zealand television Justin Marshall is convinced Ireland will keep the ball in the scrum for as long as possible, but those days had past.

“Robbie is a beast,” said Heaslip. “He didn’t have to check his run. That’s why, when I leave the ball up there for him, I turn and just watch it unfold, hands up, knowing that’s the game.”

Hansen: “We haven’t got any excuses. Ireland were outstanding and thoroughly deserved the win. It makes up for the last one, which they should’ve won.”

Schmidt: “I really thought the players did themselves proud. They did Axel proud and his family and they did their country proud.”

Two weeks later, despite Sean O’Brien returning with a peerless display at wing forward, the viciousness of the black lash prevailed (it also, eventually, forced stricter enforcement of the tackle rule at this World Cup). Henshaw remembers little of that day having been laid out unconscious on 10 minutes by Sam Cane while Simon Zebo was lucky to avoid serious injury when forearm hooked by Malakai Fekitoa.

Referee Jaco Peyper showed Fekitoa a yellow card. Cane was cited but subsequently cleared. Johnny Sexton and CJ Stander were also forced off injured inside 21 minutes, and when Paddy Jackson missed touch in the 66th minute - with Ireland trailing 14-9 - Ben Smith knew precisely what he was doing when zig zagging in field. Barrett threatened, as did Anton Lienert-Brown before Barrett gathered the offload and flipped an outrageous ball for TJ Perenara to draw three defenders - Jackson, Murray and Andrew Trimble - then deliver another beautiful one handed pass to put Fekitoa over. Sensational and cruel in equal measure.

Hansen: “I’m not sure where you’re going with this, do you want me to tell you we’re a dirty side or something? Is that what you’re saying?”

Rory Best: “Anything World Rugby can do to make the game safer. I am a parent myself and you don’t want to see people going off on stretchers.”

The Jacob Stockdale try will be replayed long after rugby ceases to exist. The All Blacks were duped on the gainline by Sexton acting as bait, so Bundee Aki could switch the point of attack for the big Ulster winger to chip, chase and slide to glory.

Schmidt: “It’s one window on one day but we’ll take it. It’s the end of a long season for them. They’ve done a lot of travel.”

Hansen: “As of now (Ireland) are number one team in the world. It’s their turn at the moment so we’ll see how they cope with that.”

As the Springboks were reminded last month, no defence can live with New Zealand when Barrett is allowed flick the switch. And still, twice in three years Ireland have shut them down in games that define not only the Schmidt era but Irish rugby.

“I don’t know if (these games) have defined us as a team,” Hansen stated matter of factly this week.

World Cup quarter and semi-finals are the real story of New Zealand rugby ever since 1991 when David Campese ripped them open at Lansdowne road. There was the majestic French at Twickenham in 1999. Stiring Mortlock’s intercept in 2003. Freddie Michalak’s unseen forward pass in 2007. Battling home in 2011 after losing Dan Carter. Destroying Les Bleus in 2015. Such moments define Hansen’s All Black years. Not Chicago. Not Dublin nights. Not Ireland.

5 All in the Game: Glowing tributes few and far between as Özil’s Arsenal exit nears