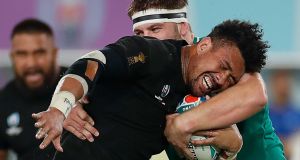 He was awarded the man of the match, an award that could equally have gone to Ardie Savea or Aaron Smith. A glorious skill-set - he showcased it to telling effect; a brilliant footballer no matter where he plays. Rating: 9

His footwork and pace took him past defenders with ease and Ireland were slightly fortunate that he didn’t get more ball in space; one great penalty turnover at a ruck. Rating: 8

His appreciation of space was manifest in a couple of neat grubber kicks in behind the Irish defence and this coupled with a couple of offloads ensured his team kept going forward. Rating: 7

An understated contribution, he acted as a link in attack and offered Ireland nothing down that channel in defence. Rating: 7

In some respects he epitomised the New Zealand performance - calm, focused, assured in everything that he did and while he didn’t get much opportunity in attack he invariably did the right thing on both sides of the ball, the reward a late try. Rating: 8

He discharged the role as playmaker with polish and poise, putting his team in the right areas of the pitch. His range of passing was good too, as was generally speaking his kicking. Rating: 8

Brilliant for the 60 minutes that he was on the pitch and his two tries were a fitting reward for the quality of his performance. His vision, passing and speed to the breakdown ensured that his team enjoyed quick, front foot ball. Rating: 9

Solid in the set piece, he helped his team to secure perfect ball at the breakdown and made his fair share of tackles when Irish players came calling around the fringes. Rating: 7

One of New Zealand’s try scorers, he was often loitering in the wider channels as New Zealand kept their width. One lineout picked off but a great support line to take Read’s pass for a try. Rating: 7

He was part of an efficient New Zealand pack but was quiet in terms of his individual contribution; one pass, one tackle but ensured a solid set piece. Rating: 6

He might have only played 30-minutes since his injury during the summer but it didn’t show as he got through a typically huge volume of work. Rating: 7

His work rate in best exemplified by the number of tackles he made (13), the joint second highest for his team on the day. Carried regularly too in a high quality display. Rating: 8

Outstanding in every facet of the game, frequently requiring multiple Ireland tacklers to bring him to the ground and even then he was able to offload possession whe needed. Rating: 9

New Zealand could afford to take him off at half-time with no material difference on how they fared at breakdown. He brought his usual work rate. Rating: 6

A very good display from the All Blacks captain, a quality that has been missing a little over the past year or so but reminiscent of his best on the day both in attack and defence. Rating: 8

Replacements: They didn’t have to do a great deal as the game was won when most of them arrived but Matt Todd and Jordie Barrett did contribute tries. Rating: 7

Coach: Steven Hansen and his coaching team got their gameplan right and his players executed it perfectly on the day. Tactically spot on, identified Irish pressure points and squeezed out errors. Rating: 8