Steve Hansen: ‘Ireland’s experience was not to win’

After a disappointing 46-14 loss to New Zealand, Ireland head coach Joe Schmidt reflects on another quarter-final exit in a rugby world cup. 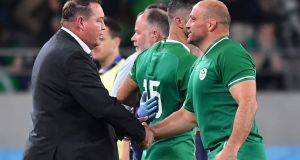 Afterwards, Steven Hansen outlined an obvious but crucial difference in the respective real-time experience - and experiences - of the players on the field in Tokyo. All week, the narrative had revolved around a seasoned Irish team seeking to expose the youth and possible vulnerability of New Zealand’s young brigade of George Bridge, Anton Lienert Brown and Jack Goodhue.

“Experience is a funny thing, isn’t it?” Hansen said with a small smile. “Our young guys have been involved in championship winning teams in Super Rugby and had big moments. That is why you can select them with confidence. They have played well in test matches. Their enthusiasm and excitement and ability to play the game and performance levels are really important.

“But so is the leadership and experience of the guys who have been through the tough moments. So it was interesting to hear of how experienced Ireland are. Half of our 23 had played in the knockout of the World Cup and won. That was the difference, wasn’t it? I’m not being disrespectful here in saying that, but Ireland’s experience was not to win. And we have the guys who actually had experience of winning. And that’s why you’ve got to be careful when you start talking about experience.”

When he came into the room, Hansen opened by giving an unprompted salute to two people who had just vacated it.

“I’d really like to take the opportunity to congratulate two men in the opposition. Rory Best and Joe Schmidt. Both had magnificent careers in their respective roles for Ireland. They made a difference and it doesn’t matter what team you play for: if you can make a difference when you are there, then you have done your job”

Few teams have managed to rattle the All Blacks as successfully as Schmidt’s Ireland. It was almost fated that Hansen’s team should be standing in Ireland’s way as they tried to engineer a World Cup quarter final win, a feat that has eluded all Irish sides since the inaugural contest back in 1987. Hansen hinted at a touch of irritation at having to answer so many questions about the two losses his teams suffered against Ireland prior to this reversal.

“Look, I dunno if you can call it a monkey. But we got reminded and reminded and reminded that we had lost to Ireland. And All Blacks teams don’t need to be reminded that they lost two games to Ireland out of 38. They know that. We don’t forget it. We remember our losses way more than we remember the wins. So it is not something that you go and talk about. Just everyone knows it. We ended up playing a team that we respect a lot. We have a lot of respect for Ireland. They are a hard team to play against. And we knew in our preparation that if we didn’t play well you would be going home.”

He acknowledged that the atmosphere in the stadium in the minutes before kick-off had been special. The Irish crowd had dominated the decibel levels as the All Blacks went through their haka and created a mood which invited anarchy. Preventing Ireland from getting a strong start was crucial.

“Well, the Irish are some of the best travellers in the world aren’t they? And they enjoy it. They have got their songs and their way of doing things. So very, very important. It was sort of like a home match here. The Kiwis are a little quieter, not quite as boisterous. We don’t mind a party but we are not quite as boisterous.

“And I think it is no different to playing in Dublin. If you do things right then you can control it. If you don’t, then the crowd becomes part of the problem. So we started really well. Defence is 50 per cent of the game and probably 90 per cent when you take in the psychological value of it. We kept our discipline and when they were carried, we were coming up and making tackles and they were punishing tackles. They were forcing errors. And they started second guessing a little bit.”

So the defending champions move on to what promises to be a frighteningly physical collision with Eddie Jones England. Hansen smiled when told that Jones had sent his regards from the other side of Japan.

“I look forward to playing him too. They will be a massive challenge but I don’t think this is the night for us to be talking about that. Test matches are hard work and we have to take whatever time we can to step off the merry-go-round to relax. We won a special test match and one the New Zealanders can be proud of.”