Ireland coach Joe Schmidt has made four changes to the starting team that beat France for Saturday’s Six Nations Championship match against Italy at the Aviva stadium. 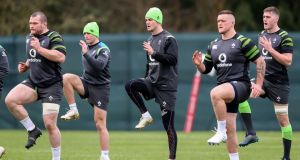 The narrative changed with one flourish of Johnny Sexton’s boot last week, and so it has again this weekend. Wales and England dipped their bread with bonus point wins against Scotland and Italy, the latter running in nine tries against the Azzurri. It follows that Ireland will be expected to do the same tomorrow at the Aviva Stadium (kick-off at 2.15pm).

What’s more, Ireland have scored nine tries in each of their last two Six Nations wins over Italy, by 58-15 two years ago in Dublin, and 63-10 last season in Rome. Joe Schmidt said he would never dare to share the crowd’s expectation of another try-fest, but after last week’s tryless win in Paris, the desire to score tries is acute.

“We want to get out there and score tries and the number of tries last year was fantastic. We knew we needed to score lots of points and I don’t think that necessarily changes. You have got to keep scoring, keep driving yourself forward, because this competition, maybe not in the last two years but the two years previous to that, came down to very fine margins. So our intention is to keep scoring points.

“I think we have added some guys who can potentially help us do that,” said Schmidt, who presumably had Jack Conan in mind, given his strike rate of 16 tries in 66 games for Leinster, and four in five Tests for Ireland, and of course Jordan Larmour, whose acceleration and ability to step off both feet at full tilt could flourish in the last 20 or 30 minutes, if sprung from the bench for his eagerly anticipated Test debut.

As forecast, Conan, along with Dan Leavy, Devin Toner and Jack McGrath, has been promoted to the pack, while Larmour has been named on the bench along with Andrew Porter, Quinn Roux and Kieran Marmion.

“At the same time we have to have a focus on doing some things really well that will inevitably lead to opportunities where we can score points,” said Schmidt, citing Jamie Heaslip’s try in the corresponding fixture two years ago, which won World Rugby’s try of the year.

“So we would love to be able to attack from wherever the opportunity lends itself and at the same time play fairly against a smart team that but for a slight forward pass would have been 20-17 points down against England with 25 minutes to go last weekend. So you just can’t be off the mark very far at all, otherwise you will put yourself straight under pressure.”

Patience is a virtue

For all of Ireland’s desire to score tries, sometimes patience is a virtue in games such as this, and to that end any frustration an early afternoon crowd may feel can’t be shared by the team.

“Yeah, I think that is really important. I remember four years ago when we won the championship by points’ differential, we scored 19 points in the last six minutes,” said Schmidt, referring to Ireland’s 46-7 win over Italy at the Aviva Stadium en route to winning the title ahead of England due to a 10-point differential.

It was actually 19 points in the last dozen minutes, which is exactly what England did against the Italians last Sunday.

“If the crowd can be patient, maybe we can do something similar,” added Schmidt.

“Sometimes it takes a lot to break a team down. Italy, I remember four years ago, when we did do that, they had been very close to beating Wales in the Millennium [Stadium] that year. It was only last year that they managed to beat the Springboks. They’ve got some new, exciting players,” said Schmidt, who likened the footwork of their 21-year-old Zebre fullback Matteo Minozzi to that of Larmour.

Yet when asked to make a comparison between Larmour and any New Zealand rugby player he’s seen over the years, either as a player or a coach – Christian Cullen being an obvious example – Schmidt resisted the temptation.

“I find it really hard to make comparisons between players in the current game, let alone in the game from years gone by. When you mention me growing up, that is a lot of years gone by. Look, I just like the way when I first saw him, probably three years ago, playing in the midfield that day, and how dynamic he was, how he sensed really good timing, whether to make the pass or whether to carry the ball or whether to step back inside or take the outside break.

“The great thing with Jordan is he has actually got the talent to do whatever of those that are required. He is not a huge young man by any means, but he has got so many other aspects to his game that he more than makes up for that size and maturity that other players will bring to the game with the aspects that I have mentioned.”

Rotating half the pack, while affording the Johnny Sexton-Bundee Aki-Robbie Henshaw unit only a third outing together in an unchanged backline that needs to find more cohesion, also makes sense given the demands of five games in seven weeks.

“CJ Stander had 42 cleanouts and 23 carries in the game in Paris. While that’s not attritional for CJ – he’s in great shape – it is really probably rewarding some performances by Jack Conan in recent times and it is also that opportunity to keep that freshness. These Six Nations games do become mentally attritional.”

The 21-year-old James Ryan is rested in part because of an unspecified minor niggle.

“It’s more precautionary than anything else. He is a young man who has had quite a few intermittent injury niggles through his development period into the professional career that he has now.

“He placed himself on Saturday in some of the most torrid trench warfare that you can imagine and won a lot more battles than he lost. I thought he was carrying incredibly strongly, his number of involvements was very high, his tackle reliability is fantastic, so a lot of what James brings we just want to make sure we look after.”

Ryan will be fresh and able to contribute fully in next week’s three-day training camp in Athlone, “which is ideal in the competition going forward”, said Schmidt.

1 Gerry Thornley: Wild reactions to this Ireland team as fickle as the wind
2 England and Eddie Jones at the vanguard of rugby’s hybrid era
3 Caelan Doris and Ronan Kelleher make strong case to start against Italy
4 Mayo GAA cut contact with Tim O’Leary after ‘Horan Out’ tweet
5 Dan Tuohy explains ‘rotten to the core’ comments
Real news has value SUBSCRIBE