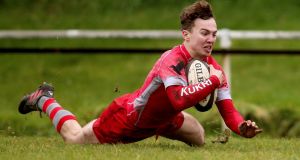 Glenstal’s Ronan Quinn crosses for a try against Bandon Grammar at the Mardyke. Photograph: Tommy Dickson/Inpho

Glenstal Abbey qualified for their second successive Munster Schools Senior Cup semi-final with an impressive win over a young Bandon Grammar School at the Mardyke.

The Co Cork side competed well in the opening 20 minutes, but Glenstal defended well before taking a grip on proceedings. They jumped in front after 27 minutes with the first of Ronan Quinn’s pair of tries.

Glenstal added a second, four minutes into injury time, when a powerful run from number eight, Mark Fleming, was finished by Andrew Hogan. Captain Ben Healy converted both for a 14-0 half-time lead.

The Co Limerick school bagged a third without four minutes of the resumption, centre Harry Benner touching down near the posts. Healy converted for a 21-0 lead.

Substitute Tom Beare claimed a consolation try for Bandon, Jack Crowley converting, before Quinn scored his second near the end.

5 With 19 wins in a row, Man City’s aura has been restored

Joey Carbery set for Munster return against Cardiff on Friday 07:00
With 19 wins in a row, Man City’s aura has been restored 07:01
Japanese fans told not to cheer during Olympic torch relay 06:51
‘I just feel very sad at the moment’ – Gemma O'Connor reflects on 19 years with Cork 06:31
Ireland not lacking in creativity but failing to translate it in to tries 06:00
Crossword Get access to over 6,000 interactive crosswords