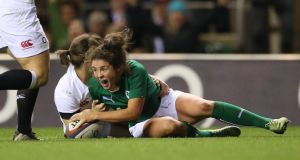 Ireland scrumhalf Larissa Muldoon touches down to score a try during the Six Nations match against England at Twickenham. Photograph: James Crombie/Inpho

Rugby round-up: Ireland’s hopes of defending the Women’s Six Nations Grand Slam and Triple Crown ended at Twickenham on Saturday evening as England secured a 17-10 victory over Philip Doyle’s side.

England made seven changes to the side which defeated Scotland last time out and it paid dividends as a strong forwards’ performance denied Ireland .

It was England who started the brightest and their pressure was rewarded after eight minutes when Hunter went over from close range following a well-drilled scrum, with Katy McLean converting.

Ireland were finding it difficult to penetrate the resilient England defence but the impressive Niamh Briggs got them on the scoreboard with a penalty on 25 minutes.

That seemed to shift the momentum of the first half and Muldoon put Ireland 8-7 ahead shortly after when she fooled the English defence with a dart from the back of a ruck, with Briggs making no mistake with her conversion.

However, England were not to be denied a half-time lead as they switched the ball from right to left at pace, with Emily Scarratt offloading quickly for Wilson to go over in the left corner.

England suffered a 25-0 defeat to Ireland last year but there was to be no repeat as Wasps flanker Packer came off the bench to further England’s lead with their third try on the hour mark.

Ireland were gifted a chance to get back into the contest when England secondrow Joanne McGilchrist was sin-binned for holding onto the ball.

However, the England defence stood firm and with Ireland staring defeat in the face, the visitors saw any chance of a comeback ruled out when both Lynne Cantwell and Heather O’Brien were sin-binned in the final minutes.

Meanwhile, Ireland’s under 20s suffered a 33-9 reverse to their English counterparts at Franklin’s Gardens on Saturday.

Ireland outhalf Ross Byrne kept his side in the game up to the break with three penalties leaving the 16-9 at half-time.

England outhalf Bobby Burns opened the scoring with an early penalty before lock Maro Itoje went over for the home side’s first try and his third in as many games.

Burns converted and added two more penalties to open up a 16-3 lead before Byrne replied with two kicks of his own before the break.

England puled away after the break, with further tries from Howard Packman, Nick Tompkins and Joel Conlon.

England coach Nick Walshe said: “Ireland are a good side and had a real go at us, but we held firm and managed to put a decent score on the board. The positive thing is that we still feel that there is more to come from the guys. We’ll take a look back at this game now and identify what we need to work before we play Wales in Newcastle.”

Linfield could get bye after opponents placed in quarantine 19:19
Champions League feast awaits but no party time in Lisbon 18:44
Athletics Ireland confirm nine sessions for National Championships 18:02
Trump prefers Jordan to James because ‘he wasn’t political’ 16:45
Judd Trump tips Kyren Wilson to succeed him after falling to the ‘Crucible curse’ 13:09
Crossword Get access to over 6,000 interactive crosswords