Munster drawn with Saracens and Racing 92 in pool of death 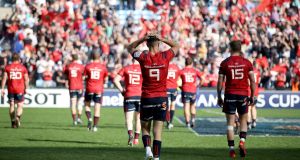 Munster have been drawn in the Pool of death in next season’s European Champions Cup. Johann van Graan’s side were placed in Pool 4 alongside Saracens, the side to have dominated the competition in recent years, winning the cup three times over the last four seasons and this year’s league and cup champions.

Munster also face Parisian club Racing ‘92, who were beaten by Leinster in the 2018 final and are ranked five among the French clubs. Welsh side Ospreys, who went into a Pro14 playoff against Scarlets to qualify for this year’s premier event, complete Munster’s group.

Leinster in Pool 1 have drawn one of the best groups of the five with French club Lyon, the Premiership’s Northampton and Italian side Benetton. While Benetton have been more impressive this season than ever before, they were the sixth ranked Pro14 team going into in the draw.

Northampton were the fourth ranked Premiership side to qualify and Lyon the third placed French club in the draw behind French champions Toulouse and Clermont.

Leinster managed to avoid Clermont, who have struck up a great European rivalry with the Dublin side, but Ulster have not. Dan McFarland and his team will meet the French giants as well as two Premiership clubs Harlequins and Bath, who Leinster beat twice in their pool phase last season in back to back meetings before Christmas.

In Pool 5 Connacht play Toulouse, who just days ago beat Clermont 24-18 in the French Top 14 final in Paris to lift the trophy for the first time since 2012. Two tries by Yoann Huget proved the difference as Toulouse capped a superb season.

Connacht will also play Gloucester, who were ranked third of the English clubs and Tier 4 side Montpellier, who complete the pool.

Twice a European Cup winner with Munster and now head coach with French club La Rochelle, Ronan O’Gara, has missed an opportunity in the pool phase to take his side to Munster and Thomond Park. O’Gara joins La Rochelle director of rugby Jono Gibbes in the coming season, having avoided being pulled out of the hat in Munster’s pool. However O’Gara will cut his European teeth as head coach against Exeter, Glasgow and Sale.