Merci beaucoup! France give up home tie and will travel to Dublin for Women’s Six Nations 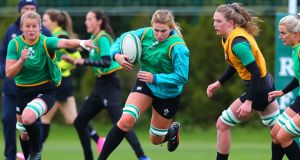 Dorothy Wall runs with the ball during an Ireland training session at the IRFU High Performance Centre in Abbotstown on Thursday. Photograph: Ryan Byrne/Inpho

France have given up home advantage and will travel to Dublin to take on Ireland in the final round of the Women’s Six Nations on November 1st after it emerged that isolation requirements for elite athletes returning here had put the fixture at threat.

Although the Ireland men’s team will return to their high-performance bubble on their return after their final Six Nations game against France in Paris next weekend, the women’s team is amateur, and many of the players would have been due to return to work two days after the game in Lille.

A press release from the IRFU outlined how the decision was arrived at.

“Ireland Government guidance for elite and high-performance athletes, and teams, who travel back to Ireland from a country which is not on the travel Green List, is to restrict their movements for 14 days, aside from sporting activity such as training and competing. The France Women’s XV, can travel to and from Ireland without restriction as there is no requirement from the French Government to isolate on return to the country.

“This is not an issue for the Men’s National Team, who, as full-time professionals remain within a strict high-performance bubble on their return from away fixtures. However, as the Women’s National Team members are amateurs, it is not possible for many of them to commit to isolating for 14 days following a return from the match, if held in France, as they, understandably, have responsibilities to their families and employers, some of which are in the teaching and medical communities.

“The IRFU, fully appreciating the players’ commitments, had, over the past weeks, discussed the implications of the travel guidance with Sport Ireland and the Department of Tourism, Culture, Arts, Gaeltacht, Sports and Media to explore if a derogation on the guidelines was possible, as the players are operating in a highly controlled high performance “bubble”. It was confirmed this week that such a derogation from the guidelines could not be granted. The IRFU understood and fully accepts this decision.

Reacting to the news, IRFU chief executive, Philip Browne, said: “We are extremely grateful to the French Federation and their Women’s Team for this superb act of solidarity with the Ireland Women’s Team and IRFU. To experience such generosity of spirit is uplifting and goes to the very heart of what the sport of Rugby, and the Six Nations, is all about.

“Over the past weeks, we were in regular contact with Sport Ireland and the Expert Group on Return to Sport regarding a possible derogation for the Women’s National Team from the established guidelines. With Ireland entering a Level 5 lockdown we fully accepted the decision not to grant a derogation on the travel restrictions for elite amateur athletes.

“I wish to thank the French Federation and their Women’s Team on behalf of all involved in Irish Rugby for their decision. We now look forward to hosting the French Women’s XV and the fixture here in Dublin, and both teams can get back to concentrating on Rugby.”

No details on a venue or time has been released yet, with the original fixture having been a 1.30pm kick-off Irish time. With all three final round fixtures taking place on Saturday, November 1st, it is likely to remain in that time slot.