‘Ireland deserve to be recognised as second best in the world’ 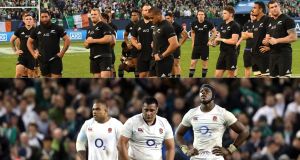 Ireland’s win over England on Sunday restored pride after a disappointing Six Nations campaign. A defeat, which would have seen the old enemy break the record for the most consecutive wins and secure back-to-back Grand Slam titles in Dublin, would have been the worst possible scenario.

In New Zealand there was plenty riding on the game too. Their 18-game winning run had already been equalled, and an increasingly confident England would not have been quiet about topping it.

After stopping Eddie Jones’ team in their tracks however, as they did against the All Blacks in Chicago - the New Zealand Herald think that it is Ireland who deserve to be seen as the second best in the world.

“What about those rankings?” writes Chris Rattue. “Schmidt’s Ireland deserve to be recognised as the second best team in the world, not England. Ireland play the game with verve and guile and it is they who have mounted the best challenge to the undisputed champs.

“England are still in a cave, and they will drag Jones into the recesses before he ever encourages them out into the light.”

And that’s not where the criticism of the English team stops. The New Zealand press have revelled in their defeat.

“Oh dear. Rugby revolution over. Back to square one for England, poor dears...

“I mean no disrespect to the England team, who can only play to their limited skill capacity. But the maelstrom of accolades for such a stilted team, considering the extent of New Zealand’s dominance for a long time and the rise of Ireland as classy challengers, has been insulting. The hoopla has been ridiculous.”

Over in England there was a mixed reaction to the result. Writing for the Daily Mail, head coach to the 2003 World Cup winning team Clive Woodward thinks that this is one of the best ever Irish teams.

“Huge congratulations to Ireland, who outplayed and in many ways schooled England. There is no hard luck story or controversy involved here. Not a hint.

“Eddie is the latest in quite a long line of modern-day England coaches who have been turned over in big matches in Ireland. It includes me, Andy Robinson, Brian Ashton and Martin Johnson. Dublin can be an incredibly difficult place to win.

“This is a very good Ireland team, one of their best ever, who up until this point had not quite fired on all cylinders in this tournament. It was great to see the real Ireland and Warren Gatland will be delighted as well. The British and Irish Lions coach will be picking his touring squad for New Zealand from real strength next month.”

Woodward highlights the performance of Ireland’s Johnny Sexton, who showed remarkable character to steer the ship despite numerous late and high tackles coming in on him.

“Above all else it was brilliant to see Ireland fly half Johnny Sexton in such match-winning form. He ended any speculation about who starts at No 10 in New Zealand.”

In the Daily Telegraph Ian McGeechan names four Irish players in his team of the tournament. Garry Ringrose at 13, Sexton at outhalf, Tadhg Furlong at tighthead and CJ Stander at number eight.

In the same newspaper Paul Hayward writes that “however good England are - or becoming - no team can be expected to confront such zeal and simply squash it..

“St Patrick’s Festival is not usually associated with party wrecking, but the cavorting stopped the minute England began their quest for a record 19th win and back-to-back Grand Slams. To imagine such a feat on Dublin soil was anathema to Ireland, so they embarked on an 80-minute war against joy. They were magnificent in that mission.”

While Simon Burnton’s piece for the Guardian goes with the headline: “Bravo England on 18 in a row but Cyprus beat rats, kicks and punches for 24”.

A win in Dublin would have topped New Zealand’s record of 18 wins in a row, but he reminds us that they would still have been five behind “the mighty Mouflons”.