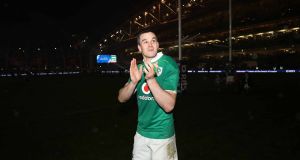 It cannot be coincidence. Trawl back through Ireland matches since Johnny Sexton was knocked out by Mathieu Bastareaud during the 2014 Six Nations title decider in Paris, the evidence is clear to see; the Ireland outhalf gets targeted early and repeatedly.

“Be careful with your timing,” warned referee Jerome Garces.

Actually, Itoje’s timing was perfect; not late enough to warrant a sin-binning with the ideal amount of pain inflicted.

There’s a template to beating Ireland that becomes apparent whenever Sexton gets escorted off, reduced to a bloody pulp.

The 31-year-old outhalf referenced it last Thursday in relation to late shots by Welsh backrowers Ross Moriarty and Justin Tipuric. Wales won 22-9 but for the 18 minutes Sexton was being patched up or sin-binned the score read 15-3.

“Yeah, it happened two or three times - being tackled on the side of the ruck - and it went unnoticed. It is a frustration but nothing we can control.”

Protecting players from players is the match officials responsibility.

Rory Best won’t be getting it in the neck from Joe Schmidt. They will.

Best made a point of bringing the marginal (but relentless) late tackles on Sexton to Garces’ attention.

On the hour mark, following Tom Wood’s shoulder to Sexton’s ribs after the ball was gone, Ireland’s captain had seen enough.

“Come on Jerome, our 10 is constantly getting hit late.”

Garces said he can only act on what the officials or Television Match Official, Ben Skeen, sees. Meanwhile, Sexton was being helped up by Cian Healy to somehow find the strength to kick the penalty.

“We are in charge, we have the TMO,” said the French man.

“But I also have a responsibility to my team,” Best replied.

The Armagh hooker turned to check on Sexton who was already entering his kicking routine before returning to Garces with a friendly pat.

“They are targeting Johnny. I’ll get it in the neck from Joe!”

“We have one, two, three and the TMO,” Garces repeated before standing-down his TMO, “It’s ok Ben, penalty, no more.”

The decision wasn’t for Wood’s lateness rather Itoje creeping offside, to get an early hit on Sean O’Brien, so from 45 metres and wide left it looked a kick that no man with a stinging skeleton could plant.

Sexton made it 13-6, and as Eddie Jones revealed after, that was the ball game.

England took every chance to hurt him. James Haskell, who was remorselessly targeted by green hulks thereafter, got an early hit in.

Twice Owen Farrell slammed his chief rival for the Lions 10 jersey into the grass.

Each time Sexton got up. After one ruck, when legitimately collared by Itoje - who read the Irish loop - he was crushed under a mass of bodies, his entire body rattled to its core.

And still he played the entire 80 minutes.

“(Garces) kept saying the TMO was keeping an eye on it,” said Best.

“All I was saying was it was my job as captain was to make sure our players were looked after and if I felt they weren’t I had to put on a bit of pressure to make sure they were or I would be getting it from Joe.”

Schmidt, sitting alongside the man he chose to lead Ireland, produced his best Dad at the in-laws grin. But it provided a brief insight into the relationship between Emperor and General.

“Look, in really tough test matches you try to be as close to the line as you can be,” Best continued. “I don’t think it was anything other than trying to put pressure on Johnny. But we have to look after our players. A key player like Johnny - we know we have Paddy who has performed unbelievable in this championship - but you don’t want players going off unnecessarily.”

Schmidt, while typically vague and balanced, concurred: “We will be reflective, we will reference a few things. There were a few neck rolls again, like last week, that maybe those things have slipped out of vogue a bit.

“I was watching a bit of Super Rugby this morning and there were a few high shots. It is an initiative that we hope will continue to be driven hard.

“At the same time it is a test match where there is a heck of a lot of intensity where heights are dropped in a split second...it’s hard to get it dead right in the game.”

But this remains a serious problem for Ireland. Sexton, for all the credit Paddy Jackson has built up recently, remains the central figure, arguably more so than any other player before him.

So the actions of opponents will probably never change.

“The guy is a competitor,” Best added. “The best thing you can say is that I definitely prefer playing with him in the green of Ireland than against him when he’s at Leinster. He’s a nightmare to play against.

“He just has a will to win, there are a few out-halves that have it now too, especially in the northern hemisphere.

“He’s a great guy to have. As much as anything, what you see on the pitch, that edge is what you need to win tight games and get over the line, but Johnny off the pitch he is a really great guy. Jacko has certainly learnt off him in the way he is around the team.

“They’re the sort of leaders you want. I hope he doesn’t read the headline but that’s what you need: a real warrior on the pitch but a real humble, good guy off the pitch.”