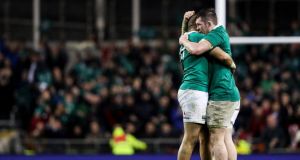 There should be huge satisfaction in victory following a 13-9 victory over Grand Slam and world record chasing England at the Aviva stadium but it should be viewed as a separate entity from the other matches in the Six Nations Championship.

There was little correlation between the manner in which Ireland hit their straps from the get-go on Saturday and previous performances in the Six Nations - the Italy match being an exception - as they dialled in right to the requisite intensity from the opening whistle.

This despite the last minute chopping and changing in personnel in terms of roles that involved Jamie Heaslip, CJ Stander, Peter O’Mahony and Dan Leavy. It resembled an underage match where everyone reaches into a kitbag pulls out a jersey, has a look at the number and starts, swapping: Stander gets Heaslip’s, O’Mahony gets Stander’s, Leavy gets O’Mahony’s.

For the most part there was no let-up, a fact endorsed by the territory and possession statistics that ran at over 60 per cent in Ireland’s favour. With a modicum of luck the home side could have added to Iain Henderson’s try, thereby making for a less fraught ending to the match.

The reason that England managed to stay in the game for so long was an abnormally high penalty count by Irish standards, conceding nine, but it was a minor cavil given the context of the match and how the game unfolded.

Joe Schmidt and his coaching team devised a gameplan that exposed English pressure points and it was well executed for the most part by the Irish players. There was nothing stilted or narrow about what Ireland tried to do and given the weather conditions that boasted considerable merit.

Peter O’Mahony was a colossus, setting the tone, but one that was embraced by so many of his teammates.

World Rugby need to have a serious look at what they are trying to implement in terms of the high tackle and the consistency of that interpretation. At the moment there is a massive discrepancy from match to match in the manner in which this area of the game is officiated: it’s hit and miss or rather missing the hits.

French referee Jerome Garces only made one mistake on Saturday and that was not to trust his own eyes and instead leave it up to his assistants and in particular television match official New Zealander Ben Skeen to police some of the tackling.

What match Skeen was watching will remain a mystery based on the radio silence. On several occasions Garces was obliged to remind Ireland captain Rory Best that the TMO was monitoring any potential instances of foul play. If he was….then he wasn’t if that doesn’t sound too Irish.

There’s no point in rehashing all the incidents in the match and there were numerous where the initial contact point was high. If World Rugby is serious about protecting players and trying to reduce the incidences of concussion from high shots then they need match officials to be more vigilant.

Garces is an excellent referee, highly regarded for his interaction with the players and the sympathetic way in which he officiates. After Saturday he might rely less on those officials around him going forward.

Penalties notwithstanding, Ireland won all 31 scrums in the Six Nations tournament and given that it’s a major launch platform for some of the team’s best attacking gambits, guru and assistant coach Greg Feek deserves a tip of the chapeau.

It’s a unit skill but as Garces advised all concerned to ‘paint good pictures,’ one that the Irish eight have got consistently right. When you consider the changes to the secondrow and then the reshuffling of the backrow just before kick-off, it is all the more laudable how rock solid, and at times, dominant the Irish scrum proved to be.

It did wobble a bit at the end but not disastrously so. On a tangential note props Jack McGrath and Tadhg Furlong both had tremendous games and not just in the tight. McGrath set the tone for his team-mates with a couple of huge hits early on, dumping Courtney Lawes and Billy Vunipola while Furlong carried hard and aggressively; their work-rate on both sides of the ball was stunning.

Cian Healy’s arrival on 59 minutes and John Ryan to see out the end game illustrated that the Irish team boasts four excellent props, that all add value in their own right. A nod too, to Ireland’s lineout, that ran seamlessly.

MORE PLAYERS TO THE BREAKDOWN

Ireland committed more players to the breakdown and successfully slowed down English ball. All teams rely on quick ball but England denied that luxury looked ponderous in possession and never really threatened in terms of their back play.

There was courage required to get in and over and none epitomised this more than captain Rory Best and man of the match Peter O’Mahony, particular thorns for the red rose shirts, so too Robbie Henshaw and Jonathan Sexton, who pioneered the return of the choke-tackle, with two exceptional turnovers.

Kieran Marmion’s game time might have been rationed to date but he stepped up and did a brilliant job in the absence of Conor Murray. He set a lively pace and tempo, his passing was crisp but it was his covering and tackling too that were so important on the day.

Similarly Andrew Conway demonstrated his aptitude to play at this level when introduced as a halftime replacement for Keith Earls, while Luke McGrath’s touch finder late on was important to his team. Dan Leavy’s voice could be heard on the ref link, demanding great speed in the defensive line, and his cameo was also impressive.

Schmidt, through necessity at times, has added depth to the playing roster throughout the tournament, and that bodes well going forward.

Despite the adverse weather conditions Ireland played with consistently greater width to their game and it was very effective. A tad more good fortune, accuracy and execution and it could have led to a couple more tries. They got outside England from time to time. It augurs well going forward.

The midfield partnership of Robbie Henshaw and Garry Ringrose is building nicely, Jared Payne’s ability to beat defenders and offload, creates space for others, while going forward to the summer tour and beyond there should be genuine competition for places on the wings with Darren Sweetnam, Niyi Adeolokun and Adam Byrne, to highlight three, possibly added to the existing options.

Add that to the back row permutations going forward and Ireland look to be in decent nick heading for the summer tour and beyond, despite the disappointment of the defeats to Scotland and Wales; there are enough silver linings.