Ireland battle on after red card before running out of steam

Australia score three tries in four-minute spell during second half 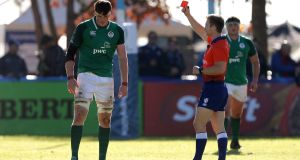 Ireland’s Ryan Baird receives a red card during the World U20 Championship match against Australia at the CRAI Stadium in Sante Fe, Argentina. Photograph: Pablo Gasparini/Inpho

An occasionally inspiring performance from a 14-man Ireland finally ran out of steam in a four-minute spell against Australia in the second half of their second match in the Under 20 Rugby World Cup in Santa Fe, Argentina.

Australia take control of Pool B while Ireland meet Italy on Wednesday in their final pool game.

Ireland played for an hour a man down after Ryan Baird’s high tackle on Australian outhalf Will Harrison on 21 minutes drew a red card. The Irish lock instantly knew he had committed the foul and put his hands on his head in despair as English referee Christophe Ridley meticulously went through the replays.

In the end there was no mitigation and the impact was high to the neck area and Baird walked.

While Ireland showed character and bounced back with high intensity play to take a 17-10 lead in the second half, tiredness and concentration undid them in a four-minute barrage between 63 minutes and 67 minutes, where Australia ran in three unanswered tries to wrap up the match.

Australia moved from 10-17 down to 31-17 ahead and the game was done. Two more tries in the six-try win put a gloss on the scoreline but by then the game was convincingly in the Wallabies’ lap.

Ireland’s initial scrum problem gifted Australia an early penalty, Harrison kicking his team into an early 3-0 lead after four minutes. In a lively opening full of incident Australian winger Semisi Tupou’s high tackle earned him a yellow card just seconds before Ronan Watters was replaced by Ciarán Booth, the flanker going off for a HIA.

With Australia down to 14 men Ireland expected to take charge but just five minutes later, and with Tupou still in the sin bin, Baird’s tackle took him out of the game.

Australia quickly took advantage with Sione Tui counterattacking from a botched Irish kick and chase to touchdown on 24 minutes, Harrison converting for 10-0. But far from hanging their heads Irish grit kicked in and the final minutes of the half was Ireland taking the game to Australia.

It was Craig Casey on 36 minutes, who darted from an Irish scrum five yards out. The Australian defence appeared to hold up the ball but Ridley gave it with Jake Flannery converting, Ireland closing the half 10-7 down and still very much in the match.

Flannery kicked for 10-10 on 55 minutes before Stewart Moore’s solo run and dummy pass outside earned Ireland their second try. It was just reward for hard work and an unlikely 17-10 lead for Ireland. But there would be consequences for the heavy work load and the lead lasted just six minutes before Isaac Lucas, Mark Nawaqanitawase and replacement lock Nick Frost ripped into the Irish defence.

Harrison scored and converted another on 77 minutes and Frost again was over in the dying seconds, Ireland out on their feet and their chances of making a semi-final much thinner.