Ireland Under-20s beat England for the second time in 2019 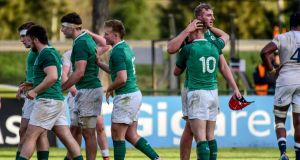 Jake Flannery of Ireland celebrates with his teammates after their win over England Under-20s. Photograph: Amilcar Orfali/Getty Images

The nature of the win won’t matter but the victory will resonate for many a day. Noel McNamara’s Grand Slam champions beat England for the second time in 2019, on this occasion in the opening game of the Junior World Championship in Santa Fe.

They’re a remarkable bunch of young players who play with the utter conviction and belief, undaunted by setbacks or the occasional imperfections of performance. Ireland made mistakes, gave up some soft scores, yet against a gargantuan England side, they never took a backward step, stuck to their game plan and when it came down to it, their opponents blinked first.

Even injuries refused to knock Ireland from their playing rhythm. In truth though the plaudits go to all who contributed on the night in securing a victory that will propel Ireland towards Saturday’s seminal meeting against Oceania champions Australia with a pep in their step.

The opening throes mirrored the Six Nations clash earlier in the season in Cork when Ireland gave up an early lead, on this occasion conceding 10 points inside eight minutes. England wing Ollie Sleightholme scored a try after Ireland got a little narrow in defence from a scrum on one side of the pitch which allowed a line break.

Despite a fumble, England managed to work the ball to the other touchline for Sleightholme to beat the despairing tackle of Irish fullback Iwan Hughes. Manu Vunipola added a superb touchline conversion having earlier kicked a penalty.

However this Ireland side has shown all season that they thrive in adversity and from the kickoff responded with a try of their own. Charlie Ryan charged down English scrumhalf Ollie Fox’s attempted clearance, re-gathered and although forced into touch, Ireland pinched the subsequent lineout and after several one-out surges close to the English line, outhalf Jake Flannery stepped inside a tackle and dotted down.

He added the conversion and despite conceding another three points to Vunipola, Ireland grabbed a second try thanks to Stewart Moore’s quick thinking, when he spotted that Fox had taken the ball back over his own line, scurried round the side of the ruck and dotted down.

Flannery’s conversion gave Ireland a 14-13 lead and when English flanker Aaron Hinkley received a yellow card for a high tackle on Angus Kernohan five minutes from the interval, it sent McNamara’s side into the dressing room with a positive mindset but that dissipated in the first five minutes of the second half when they conceded eight points, through Sleightholme’s second try and a third Vunipola penalty.

Ireland’s discipline at the breakdown was at the root of their discomfort, sloppy penalties costing them points, field position and allowing England to run down the clock on the sin bin but no sooner had the English been restored to the full complement than they lost Vunipola for a high shot on Hughes.

Ireland maximised their numerical advantage, with flanker David McCann scored a brace of tries, both of which were converted by Ben Healy but in between Irish errors allowed their opponents to surge outside the cover for a third time in the game; wing Tom Seabrook with a fine finish for a try.

England’s chances disintegrated on 66-minutes when replacement hooker Alfie Barbeary received a red card, for lifting Hodnett and dropping him dangerously on his neck/shoulders. Ireland opted for a scrum, England chose to take off wing, Sleightholme so Casey and Healy exploited the space on the short side with the latter crossing in the corner for a try and then adding a brilliant conversion to move the Grand Slam champions into a 35-26 lead.

There was just one final embellishment to come from an Irish perspective and rather fitting that it was the outstanding Hodnett who wrote the postscript to a wonderful victory with Ireland’s sixth try; Healy’s conversion copper-fastened a prodigious impact from the bench.