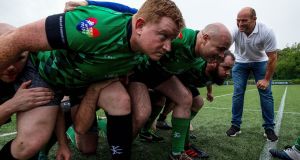 Rory Best leads a training session with the Emerald Warriors ahead of the Union Cup.

Irish rugby disappears into summer pursued by the obvious and the unknown. The manner of Ireland’s defeat in Cardiff over St Patrick’s weekend lingers because it makes little sense considering everything that went before.

What England did to Ireland in Dublin was understandable. Saracens inflicted similar damage to Leinster at St James’ Park. Size and physicality can prove too much for Irish teams to bear, but capitulation at the tail end of the Six Nations created genuine concern.

Rory Best was in Dublin this week to put the Emerald Warriors through their paces ahead of the Union Cup at Dublin City University this weekend (June 7th-9th). The Ireland captain’s reasoning for the Cardiff loss is twofold: the “bad start with the weather” and Hadleigh Parkes “reeling in” Jacob Stockdale.

“They’re massive moments. If we go to 7-7 there, we breathe a bit of a sigh of relief and all of a sudden there’s a bit of pressure back on them, but they ended up going to 10 points. And that forced us to play, and we didn’t do it particularly well and then the set-piece came under pressure.”

The weather was down to Joe Schmidt insisting that the stadium roof remained open. Also, Stockdale’s try that never was would have come wildly against the run of play.

“It just spiralled a little bit from there. The bigger thing we need to look at is why we started so badly. The last thing you want to do is go to the first (World Cup) game against Scotland, or even if you give Japan an opening like that with the atmosphere that’s going to be in that game, you just make life hard for yourself.”

“I think we play best when we enjoy our rugby. Go out and bring physicality, but ultimately we enjoy it and we get fired in. You look at the Grand Slam in 2018 and look at the comparisons, everyone looked like they were enjoying their rugby.”

Feels like he’s talking about Conor Murray and Johnny Sexton.

“By the end of the Six Nations it looked like the pressure was almost too much for us, but it isn’t the case when you look at the big-game players we have. We’ve just got to address it. There’s no point going ‘Oh sure it’ll be right when we get to Japan’ because if you have that attitude, like 2007, that’s when you come unstuck.

“I’ve heard a couple of players who played then saying ‘there are a lot of similarities to it’ but in my eyes, there isn’t. Because we now know we can’t just reproduce what we’ve produced. We kind of went in ‘07 saying we’ll be fine when we get there. Well, we won’t be. We can’t just have that attitude, we’ve got to look at why, how and be big about it.”

For all the concerns about losing two world class opensides in Sean O’Brien and Dan Leavy, almost every other nation is suffering in this deeply problematic area. Backrowers are an endangered species. Wales should still be led by Sam Warburton. Sam Cane just returned from neck surgery. The Springboks have shelved Warren Whiteley and skipper Siya Kolisi until further notice, while David Pocock, the greatest Wallaby of them all, is a major concern for the World Cup.

Also, World Rugby appears to have made an error by not extending the 31-man squads for Japan 2019. Best added his voice to concerns previously expressed by Schmidt and Ireland fitness coach Jason Cowman.

“We have a six day turnaround between Japan and Scotland before five days (Scotland to Russia),” said Best. “You get an injury that maybe takes you out for two games but not the entire tournament. If you get a couple of those you have to make fairly harsh decisions when it is actually not right as the player could be back for Samoa.

“I’d be more inclined to increase the squad size to 35 players. The problem 31 is by the time you name three hookers and three nines there are positions you are really short on. There is a backrow/second row type player who will have to cover both but at a World Cup you shouldn’t have to makeshift people in there. It should be: this is our best squad. 35 players would give you that luxury.”

Walk tall, golfers, and tell Leo that golf is not the enemy at the gate 06:35
Mick’s millennium: McCarthy clocks up his 1,000th game as manager 06:00
The interpros give players a chance to prove the coaches wrong 07:09
Pro14: Munster-Connacht rivalry set to take on a sharper edge 06:00
Indoor Championships draws record number of athletes despite pandemic 06:00
Crossword Get access to over 6,000 interactive crosswords