John O'Sullivan at the Aviva stadium 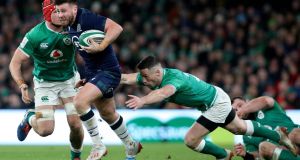 The pre-match debate with regard to who should be Ireland’s first-choice scrumhalf continues on the evidence of the 80 minutes against Scotland. In untangling it from a fitful – if gutsy defensively – Irish performance, the verdict remains inconclusive and the arguments will continue to rage.

Conor Murray played a pivotal role in Ireland’s try and his range of passing – aside from one that was picked off – was generally well judged and chosen. John Cooney’s performance in the final quarter of the match was impressive, particularly his tackling, which on at least two occasions represented crucial interventions. He also kicked well.

The problem for both Irish scrumhalves was that Ireland’s performance was off colour for the most part, lacking control, as Scotland’s ferocity knocked them out of kilter. Neither scrumhalf was really given a platform to dominate the game. Scotland were wonderfully aggressive at the breakdown and the home side with a spiralling injury issue ended up hanging on for dear life.

Murray had been awarded the nine jersey for Ireland and the 30-year-old was given the opportunity to vindicate Andy Farrell’s decision and faith.

In those circumstances Murray would have craved an early involvement, so in receiving the kick-off, he couldn’t have had an earlier touch. He elected to kick long rather than find touch, a preamble to the Scots owning the ball for the next 90 seconds, the visitors reward for their dominance an early penalty.

His first box-kick went a smidgeon long for the chasing Jacob Stockdale – another later in the half didn’t travel far enough – but Murray’s general play was sharp and authoritative, his passing slick in terms of speed and in picking and choosing the right ball carrier from several alternatives.

Ireland’s emphasis on moving the ball wide placed a significant premium on their scrumhalf getting to the breakdown and he certainly fulfilled that remit for most of the opening 40 minutes. His assurance was never more in evidence than for Johnny Sexton’s try on 11-minutes, executed with training ground precision.

Murray’s timing of the pass to Sexton, in behind Jordan Larmour who had come short as a decoy, was pitch perfect, ensuring that the Irish captain had an unencumbered run to the line. Scotland periodically managed to slow down Irish ball at the breakdown or win the collisions and Murray’s decisions to box-kick were understandable.

The problem with the ploy, apart from it being telegraphed, was it allowed the Scots to drop deep and fill the chasing channel, denying the Irish pursuers a chance to get off the ground to contest the aerial duels. Murray also covered in behind, fielding one kick from Scottish fullback Stuart Hogg, only for a teammate to transgress at the ruck.

In the final minute of the half, Ireland had stormed to the cusp of the Scottish 22 following a superb break by Bundee Aki, taken on by Garry Ringrose, but from a ruck Murray’s pass, intended for Sexton, was picked off by Sam Johnson. There was a suspicion of offside but it didn’t quite have the zip to beat the defender, who gambled and won.

Ireland scrambled to get back and CJ Stander forced a brilliant turnover penalty several metres from the Irish line to allow the home side to escape to the dressingroom with a 10-6 interval lead.

Murray demonstrated his experience one minute after the interval in drawing a penalty; referee Mathieu Raynal admonished him with a mild rebuke, counselling the Irish scrumhalf not to milk any infringement by deliberately playing for a penalty.

The helter-skelter nature of the game, the frequent turnover of possession due to errors from both sides, made it a messy game for the respective scrumhalves. Despite having that pass picked off Murray never waivered in trying to choose the right pass from the base of rucks, often firing the ball to receivers who were standing 10 to 15 metres away.

He also periodically challenged the fringe defence, evident in the 55th minute when with Ireland deep inside the Scottish 22 he took on slow ball, taking out several defenders and forcing the Scots to concede a penalty. He followed this with a superb touch kick, which got even better when Ireland pinched the subsequent lineout.

On 59 minutes he was replaced, Cooney getting a huge cheer on his introduction; it certainly didn’t feel as if it should have been a reaction to and judgment on Murray’s performance.

Cooney’s first involvement was to try, unsuccessfully, to dig the ball out of a retreating maul that had gone to ground, his second and third, two tackles in quick succession, a feat he repeated again that were even more prescience when bringing down Ali Price from behind as the Scottish scrumhalf scampered clear.

Cooney showed his tactical acumen on 66 minutes, his clever and well judged chip forcing Scotland back into their 22. A box-kick is only as good as the chase and Andrew Conway did brilliantly to contest Cooney’s 80 seconds later, Raynal ruling that the ball had come off an Irish hand.

A superbly judged clearance from Cooney took play from the Irish 22, almost to the Scottish 10-metre line. There was a vitality to everything he was doing and that was manifest in an important tackle after a Scottish line break on Hamish Watson as the outstanding flanker raced into the Irish 22.

Cooney had the penultimate touch of the match, having, initially had to scramble the ball away from a retreating Irish scrum, he found Ross Byrne from the ensuing ruck, to ensure Ireland survived.