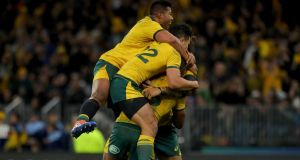 Ireland could jump to the top of the world rankings for the first time without breaking sweat this weekend if a combination of results go their way in Auckland and Cardiff.

Presently sitting third on the World Rugby list, Joe Schmidt’s side are in Portugal for warm-weather training this week and are next in action against England at Twickenham on Saturday week.

To knock the All Blacks off the perch they have held for almost a decade will require Australia to win or draw against New Zealand at Eden Park on Saturday morning followed by a draw between number two ranked Wales and England (fourth) at the Principality stadium in the afternoon.

Warren Gatland’s side will jump ahead of New Zealand if they beat England even if New Zealand are triumphant in the Bledisloe Cup decider.

And England can also go top even if the All Blacks win, but they would need to beat Wales by more than 15 points.

After scoring a record 47 points against the All Blacks in Perth last weekend, Michael Cheika’s Wallabies will certainly be up for it, but history is not on their side.

New Zealand have not lost to Australia at the ground since 1986, with the home side winning 25 of 29 Test matches at Eden Park stretching back to 1925. Indeed, the last team to win there was France in 1994, a year before the game went professional and the All Blacks have put together a remarkable 42-game unbeaten run at the ground since then.

Those hoping a draw might be on the cards are also out of luck when the record books are looked at, with the sides only once drawing a match in New Zealand, at Wellington in 1962. There have been six draws on Australian soil in the 189 meetings between the sides, three each in Sydney and Brisbane.

If Australia do claim a win or a draw, the number one spot in the rankings will then go to who wins in Cardiff in the second meeting between Wales and England in a week.

Eddie Jones’s side hold the upper hand after their comfortable 33-19 victory at Twickenham last Sunday, but Warren Gatland will be looking for a much better show from his Grand Slam champions on home soil.

To claim the number one spot, Ireland require a stalemate between the sides, an outcome that has only happened twice in Cardiff , the last of which was in February 1983 at the Arms Park.

So it’s safe to say it’s a longshot, an opinion shared by the bookmakers, who quote around 800-1 for both matches to end level.