Gerry Thornley: Birthplace has no bearing on right to play for Ireland 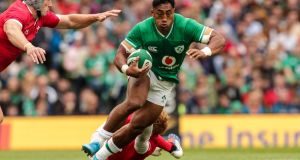 Jean Kleyn’s inclusion in the World Cup squad may have revived the debate, but for some reason Bundee Aki’s presence in the Irish team seems to cop more flak than other past and present Irish players who qualified via the residency route.

Some of the complaints are for purely rugby reasons, even if the notion, expressed again this week by Luke Fitzgerald, that a player’s birthplace should in any way influence Ireland’s selection policy in this World Cup is plain daft.

However, some of the complaints are snide. Before Aki played against the All Blacks, their assistant coach, Ian Foster, observed: “They’ve turned him into an Irishman . . . he looks like an Irishman now, doesn’t he?”

For anyone’s nationality or loyalties to be questioned in this day and age on the basis of appearance is absurd and dislikable. Likewise, the notion that Cork-born Olympic rowers Gary and Paul O’Donovan are “uniquely Irish”. Are appearances, accents and phraseology to define our Oir-ishness?

In the current climate of rampant nationalism, ironically driven by the descendants of immigrants in America and Britain, it is dangerous territory.

Foster’s comments were particularly curious coming from a Kiwi assistant coach of the All Blacks, given they’ve always drawn heavily from their Polynesian as well as Maori player base. Yes, the Pacific Islands are inextricably linked in socio-economic terms with New Zealand, and kids from the islands dream of playing for the All Blacks, as four of them will do in this World Cup.

However, hypocrisy is rampant here, for if players declare for their islands, they effectively have to ply their trade in Europe, as they then won’t be signed by the New Zealand franchises.

Sanzaar will not even admit a combined Pacific Islands team into Super Rugby without a guarantee of nearly €11 million. This has been derided by Pacific Rugby Players Welfare (PRPW), a voluntary, non-profit making organisation, as “consistently damaging” to the region.

And for all the hailing of Agustín Pichot’s campaign to extend the residency ruling, the PRPW also rubbished his proposed Nations Championship, as it would have meant Pacific Island players going through their entire test careers without playing against Tier 1 nations outside of World Cups.

The three-year residency ruling will be extended to five years in January. At three years, it favoured the richer rugby countries and further hurt the poorer ones, albeit the rich have already circumnavigated the five-year threshold in different ways. Clermont have an academy in Fiji. Montpellier have recently emulated Munster in signing a clutch of teenagers, etc etc.

Every time he plays for Connacht or Ireland, we can be sure Aki inspires young Irish kids to run with the ball on wintery Sunday mornings

So maybe the five-year rule should be extended in time.

However, in the context of a rugby career, three years, and certainly five, is an extensive commitment. Five is roughly equivalent to 20 years in the working lives of most adults, especially given rugby’s ever-shortening careers. Furthermore, even if the five-year ruling had been applied in time for this World Cup, Aki and CJ Stander would have been eligible.

Born in the Auckland suburb of Otahuhu, to his Samoan parents, Hercules and Sautia, and the second-eldest of seven children, Aki played rugby at Manurewa High School, one of the largest multicultural secondary schools in New Zealand. Rugby gave him opportunities in life that he otherwise would not have had. He and his family then made the difficult decision to relocate to the west of Ireland, where he has twice re-signed for Connacht.

No less than Stander with Munster, and unlike other Irish-born players who have moved abroad (and good luck to them), Aki has rejected much more lucrative offers, notably in the Top 14. Every time he plays for Connacht or Ireland, we can be sure Aki inspires young Irish kids to run with the ball on wintery Sunday mornings.

There is no inconsistency or hypocrisy in the IRFU upholding a policy whereby players who qualify by residency and, critically, play for one of the provinces, are considered for selection, and indigenous players based abroad are not. The only trace of inconsistency was for Johnny Sexton’s two-year sojourn to Racing, an exemption based on his contractual release for training and to returning home in time for the 2015 World Cup, as well as his ability.

The union’s policy re Aki, Stander, Kleyn and others, in contrast to Simon Zebo, Donnacha Ryan and co, is entirely consistent with their support of the provinces, whose strength, popularity with fans and success dwarfs their Welsh and Scottish counterparts. Making more exemptions could lead to a trickle and then a flood which would irreparably damage the provinces.

The inclusion of players who qualify by dint of residency in Ireland’s 31-man World Cup squad is relative. The aforementioned trio are the only ones not born in Ireland. The English and French squads each have five players born outside those countries, while the Wallabies, who have embraced the diversity and multi-ethnicity of its squad under Michael Cheika, have no fewer than 10, including four Pacific Islanders who qualify by residency.

Bear in mind Italia ’90 has been hailed as the high point of Irish football, yet just six of Ireland’s squad of 22 were born in Ireland. Nope, not too many complaints then, either.

Perhaps most of all, bleatings about non-Irish born players being picked ahead of Irish-born ones seem particularly incongruous coming from this country. Is there anything more Irish than seeking a new life abroad? Along with the black stuff, our pubs and our breakfasts, it defines us.

Be it poverty, war, famine, the economy or whatever, since 1700 between nine and 10 million people born in Ireland have migrated in search of better lives.

Most, an estimated 5 million, were accommodated in the United States, back in the days when their presidents (Harry Truman especially) and political leaders had compassion in their souls and America was a welcoming country. By the 21st century an estimated 80 million people worldwide claimed Irish heritage. In Great Britain, six million people, or 10 per cent of the population, have at least one Irish grandparent.

Nothing typifies this in a rugby context more than the USA Eagles World Cup squad, which features four Irish players: AJ MacGinty, Dylan Fawsitt, John Quill and Paul Mullen. We didn’t hear any complaints from these shores on what must have been a hugely proud achievement for the quartet and their families.

Ditto Ian McKinley and his family, after Italy and Italian rugby gave him the opportunity to rebuild his rugby career. Again, no complaints in Ireland about him representing the Azzurri through residency. Nor should there have been.

They have become rocks in the Irish team, and vital to the recent run of unprecedented success

The Irish diaspora has been largely welcomed wherever they have gone, and in return Ireland is now becoming a more multicultural society. As part of that process, and as the vast majority of rugby supporters surely do, we should welcome and even celebrate the undoubted commitment of Aki, Stander et al as Irish players.

They have become rocks in the Irish team, and vital to the recent run of unprecedented success. Not many were complaining when Aki made the break and the pass from which Stander scored when Ireland sealed the Grand Slam at Twickenham.

Besides, questioning Aki’s or Stander’s right to play for Ireland probably says more about the people who do so than the players themselves.